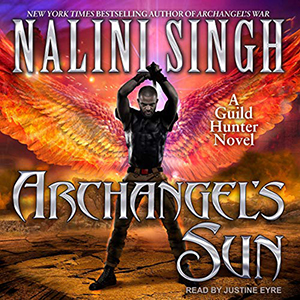 The Archangel of Death and the Archangel of Disease may be gone but their legacy of evil lives on—especially in Africa, where the shambling, rotting creatures called the reborn have gained a glimmer of vicious intelligence.

It is up to Titus, archangel of this vast continent, to stop the reborn from spreading across the world. Titus can’t do it alone, but of the surviving powerful angels and archangels, large numbers are wounded, while the rest are fighting a surge of murderous vampires.

There is no one left…but the Hummingbird. Old, powerful, her mind long a broken kaleidoscope. Now, she must stand at Titus’s side against a tide of death upon a discovery more chilling than any other. For the Archangel of Disease has left them one last terrible gift…

I was so excited for this story! The Hummingbird has been a mysterious character throughout the series. I couldn’t believe she was going to be brought out and given her own story!

The Hummingbird has always been in the background, with mentions of her paintings and her love of her son. But the times she has appeared in the stories, she has always been described as so fragile, with a broken mind. So I was so confused when Raphael calls on her to join with Titus in the war against the reborn on his continent. I couldn’t see what characteristics she had that would help Titus. Apparently he sees what others cannot, because even Titus was confused about his new partner.

Archangel’ Sun brought us the beautiful and sad story of the Hummingbird’s life. But she is ready to build a new life and she totally blossoms in this story. Titus has to learn to adjust his idea of the Hummingbird to match what she is today. The romance that built while each dealt with their own issues was so sweet.

The war against the reborn and now the crazy vampires takes a terrible turn when they realize the reborn they are fighting are special. The fighting is ongoing and the troops are getting tired. These things just keep popping up.

The build up to the big reveal at the end was tense. The duo find out more and more and my mind was just thinking “what ARE these things???” Every little tidbit they find takes them down a road that could mean great danger to all angels. The ending was a shocker and I am so interested to see how the new knowledge is going to work going forward.