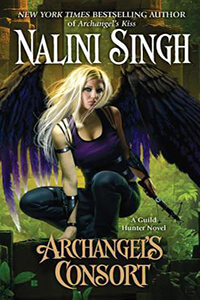 Vampire hunter Elena Deveraux and her lover, the lethally beautiful archangel Raphael, have returned home to New York only to face an uncompromising new evil…

A vampire has attacked a girls’ school—the assault one of sheer, vicious madness—and it is only the first act. Rampant bloodlust takes vampire after vampire, threatening to make the streets run with blood. Then Raphael himself begins to show signs of an uncontrolled rage, as inexplicable storms darken the city skyline and the earth itself shudders. The omens are suddenly terrifyingly clear.

An ancient and malevolent immortal is rising. The violent winds whisper her name: Caliane. She has returned to reclaim her son, Raphael. Only one thing stands in her way: Elena, the consort who must be destroyed…

All the signs are there. An ancient is awakening. The changes that Raphael experience give strong hints that it is his mother. Raphael has a lot of mixed feelings for his mother considering the last time he saw her he was broken and bloody while she laughed and sang and walked away from him.

Elena also deals with family issues. Her father has shunned her since her mother’s death. He blamed her being hunter-born which brought the massacre that took the life of her mother and sisters. Elena discovers that one of her sisters is also hunter-born. This makes her wonder what daddy dearest will do to her. In the ensuing conflict, Elena finds out some information that leaves her more confused than ever about her father.

Now that Caliane is waking, Elena can help soothe the worries that Raphael has about confronting his mother again. That it is possible to love that parent, but also hate their actions at the same time. I think that this helps strengthen their own growing relationship. There is still a part that will haunt Raphael if Caliane wakes up and she is still crazy.

I can see even more of what each Elena and Raphael bring to the relationship for each other. They are stronger together. We see changes in Raphael, but those changes don’t seem to affect him as bad when he can draw on his relationship with Elena.

The hunt for Caliane’s sleeping place was fun and exciting. I love how the ancient tricks and traps are played to keep Elena, Raphael & Illium on their toes as they search for Caliane’s hiding place. She definitely has it out for Elena. Caliane cannot have too strong a resentment after Elena’s part in the final conflict. Of course Lijuan has to show up to try and create havoc. The fight left me listening with heart pounding.

The more I dig into this series the more excited I get. They have such exciting adventures while at the same time showing the growth between Raphael and Elena. The Seven are so fascinating and I can’t wait to get to know them better. I want to know more about Illium and his love affair with the human and see him somehow have an HEA. I will take any of the others too though.

I definitely recommend this series, and on audio as well. They will make you want to permanently attach your headphones!