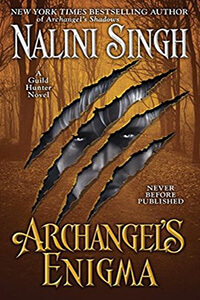 Naasir is the most feral of the powerful group of vampires and angels known as the Seven, his loyalty pledged to the Archangel Raphael. When rumors surface of a plot to murder the former Archangel of Persia, now lost in the Sleep of the Ancients, Naasir is dispatched to find him. For only he possesses the tracking skills required - those more common to predatory animals than to man.

Enlisted to accompany Naasir, Andromeda, a young angelic scholar with dangerous secrets is fascinated by his nature - at once playful and brilliant, sensual and brutal. As they race to find the Sleeping archangel before it's too late, Naasir will force her to question all she knows...and tempt her to walk into the magnificent, feral darkness of his world. But first they must survive an enemy vicious enough to shatter the greatest taboo of the angelic race and plunge the world into a screaming nightmare...

Archangel’s Enigma is a book I’ve been waiting for! Naasir is one of my favorite characters. He does not have the social skills a normal person would have. That is what makes him so unique. His attempts at common actions are different and always a surprise.

Naasir has been watching those around him find their mates and he is wondering if that is something that he will ever find. He is actively looking to find that special person that will accept him as he is.

“Seven months Naasir had been hunting. Seven months since he’d told Ashwini he was ready to find a mate. Seven months and still his mate hadn’t made herself known to him. Didn’t she know he was looking for her?”

There is an important mission that Raphael has called on Naasir to complete. That is another thing about Naasir, he will not stop until he has finished his task. This job requires Naasir to find an ancient Archangel before Raphael’s enemies find and murder him in his sleep. He is to take Andromeda with him for this quest. A special scholar that has sworn herself to celibacy. She also has another secret about herself she has been keeping from everyone and her time is running out. No matter how her and Naasir feel about each other, she knows that it cannot overcome her obligations.

As always, Nalini Singh takes us on an adventure that will keep you mesmerized. Naasir made me laugh, probably when even when I wasn’t supposed to. So many trials are put in the pair’s way in an attempt to keep Naasir from completing his mission. You never know what is going to happen next. Archangel’s Enigma balances the excitement of the mission with the growing mating of Naasir and Andromeda so well. This was definitely one of my favorites of the series.