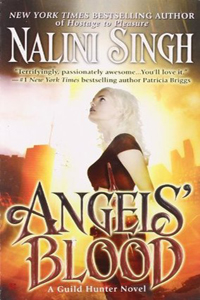 Vampire hunter Elena Deveraux knows she is the best- but she does not know if even she is good enough for this job. Hired by the dangerously beautiful archangel Raphael, a being so lethal that no mortal wants his attention, Elena knows failure is not an option—even if the task is impossible.

Because this time, it's not a wayward vamp she has to track. It's an archangel gone bad.

The job will put Elena in the midst of a killing spree like no other—and pull her to the razor's edge of passion. Even if the hunt does not destroy her, succumbing to Raphael’s seductive touch just might. For when archangels play, mortals break.

The Guild Hunter series has been recommended to me by a few people, so I thought I would start it right after the Psy-Changeling. Right now, I’m not sure I am as enchanted as I thought I would be. This is making reading this one a bit slow for me.

Elena is a great character. She seems to be comfortable in her life despite all of her family issues. She has the Guild as her family now. Her friends, her job and her apartment all seem to keep her satisfied. Except for one little kink. The nightmares. She has experienced an event so horrifying, she relives it constantly.

Elena gets called on a job, well, more like specifically picked, for a job with the Archangels. She really doesn’t have much of a choice, and this is where Raphael comes in. I’m on the fence with Raphael. There are times when he seems to be normal, but then other times so rigid and cold. I thought maybe his character was trying to come across as the whole alpha male character that I’ve seen in other books. That isn’t how he seems to me though. Even in his demands that Elena is his, he seems cold. Like, she is his, but not in any emotional sort of way.

Elena & Raphael work together to bring down a wayward Archangel and I found that pretty interesting. The scenes were very descriptive and downright horrifying. I loved it. It was fascinating and the writing really had me envisioning the scenes. Those times when you just feel scared but fascinated at the same time. I thought those were really well done.

The ending really surprised me. I think it was a big surprise to everyone.It left on a note where I still hadn’t really connected with Raphael. Sarah and Ransom I loved. They were awesome side characters. There was enough here that I will continue on in the series. I sometimes have a hard time with the first book, but get pulled in the farther in I go. With as many high recommendations for this series, I have a feeling it won’t be long before I’m in love.

I think because I just listened to one whole series back to back with a particular narrator, I had a hard time adjusting to Justine Eyre. I’ve listened and liked her other books, so I think it is my narrator switch that has me hesitant about the narration. I think once I get into the swing of the series, my ears will adjust.