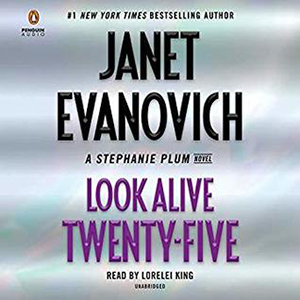 There's nothing like a good deli, and the Red River Deli in Trenton is one of the best. World-famous for its pastrami, cole slaw, and for its disappearing managers. Over the last month, three have vanished from the face of the earth, and the only clue in each case is one shoe that's been left behind. The police are baffled. Lula is convinced that it's a case of alien abduction.

Whatever it is, they'd better figure out what's going on before they lose their new manager, Ms. Stephanie Plum.

I did it! I’m all caught up! The books in the Stephanie Plum series are such fast listens. I feel relief at achieving this goal of getting caught up.

Stephanie is the usual bumbling, pretty much helpless, character she always is. In Look Alive Twenty-Five, she actually has to take on the role of a manager of a deli. We find yet another thing she’s not good at. Lula is brought on as her assistant manager but decides to bring her skills to the sandwich making position. She really made me laugh at her ideas for sandwiches and her approach to filling orders.

The main part of the story that I try to focus on is the mystery. As I’ve said before, all the stuff with Stephanie and the men just irritates me, so the mystery is where I really pay attention. This one was really interesting and I found myself wondering the whole time “are the missing men dead?”. Especially when a familiar face becomes one of the missing! I felt like Ranger had more of a role with this mystery than anyone which is good, but still the clues were hard to come by and puzzling. Our ending is kind of comical but we are left with an involved player who is not likely going to see any repercussions.

Overall, I felt ok with the story. There were a lot of laughs with our favorite characters and the story worked if you ignored the love triangle thing. I’m glad I jumped back into the series and got caught up. I don’t know how long Janet Evanovich plans to continue this series. But I would like something to finalize everything. Like Stephanie find a job she’s good at and makes a decision on who is going to be her man. I wonder if the author even has an idea or plan yet. I guess I’ll have to watch the new releases to see.

Lorelei King does an amazing job on the audio as usual. I love her Lula voice! Definitely a great choice for this series. King is great at bringing out the humor in the places it is supposed to be.