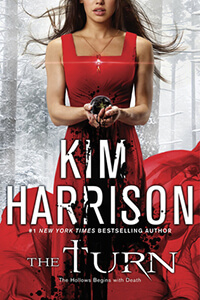 Kim Harrison returns to her beloved Hollows series with The Turn, the official prequel to the series that will introduce fans and readers to a whole new side of Rachel Morgan's world as they've never seen it before!

Can science save us when all else fails?

Trisk and her hated rival, Kalamack, have the same goal: save their species from extinction.

Death comes in the guise of hope when a genetically modified tomato created to feed the world combines with the government's new tactical virus, giving it an unexpected host and a mode of transport. Plague takes the world, giving the paranormal species an uncomfortable choice to stay hidden and allow humanity to die, or to show themselves in a bid to save them.

Under accusations of scientific misconduct, Trisk and Kal flee across a plague torn United States to convince leaders of the major paranormal species to save their supposedly weaker kin, but not everyone thinks humanity should be saved.

Kal surreptitiously works against her as Trisk fights the prejudices of two societies to prove that not only does humanity have something to offer, but that long-accepted beliefs against women, dark magic, and humanity itself can turn to understanding; that when people are at their worst that the best show their true strength, and that love can hold the world together as a new balance is found.

The Turn by Kim Harrison is meant to be the prequel to the Hollows series. It is showing us just how the world came to acknowledge the vampires, pixies, elves and all the non-humans living amongst them.

The Turn has scientists Trisk and Kalamack trying to discover ways to keep their species from extinction. They are enemies right from school and their advancements and discoveries turn into a dangerous competition. We spend a great deal of time going through the jealousies surrounding Kalamack and Trisk. I would say too much time. By the time the big virus hits, we’ve spent way too much of the book going through relationships and setups. Wheeling and dealing. I got to a point I was bored and ready for the adventure to move on. Another point that kind of spoiled The Turn for me was knowing what was going to happen. I knew that going in. It’s a prequel and if you’ve read the series, you know what happens to the human race and the coming out of Inderlanders. It still kind of made all of the action that did happen after the virus is loosed, kind of feel pointless.

I think there are two big points in The Turn. One, we know exactly how that virus gets into the world and we also know how certain people come into the powerful positions they are in when the rest of the Hollows series starts.

I thought through the book I was seeing a certain person and qualities about this person that I didn’t like. The surprise at the end about that person sort of took me back. I can’t give you spoilers, but it really made the whole story I’d just read, feel different.

Some of our characters are seen throughout this book, and yes, we even get to see a demon. If you have read the Hollows, you know the demons play a part in the problem with the elves. They also play a part in the Turn (the actual event, not the book) as well.

The story was somewhat disappointing for me. It is possible I went in with too many expectations, hoping to see more of characters that I could relate to from the series. The Turn was also very drawn out. I felt there could of been a lot trimmed or shortened down. A lot of the extra material I think was meant for us to feel how the Turn affected the Inderlanders and the humans, but after awhile, you pretty much already know and are just ready to move on.

In all the disappointment of the Hollows ending, I think the author wanted to give the fans one more look into the series and this was a way we could go back without having to change anything that happened in the series itself. Also, it is very possible there are links with certain characters that I should have related to events or other parts of the series, but I may have missed some. A few stuck out though, and they were interesting to know. The links I did see I thought were awesome the way Kim was able to tie a little piece of that event or person back to something that happened. It challenged my brain to look to the series to pinpoint when that person or event was addressed.

Overall, it was interesting to see just how the Turn happened, and the reactions from the Inderlanders coming out. The book just seemed overly long with a lot of detail I felt like I could have skipped. For Hollows fans, you would definitely be interested in some of the aspects of the book that directly relate to characters in the series, but be prepared to invest a good amount of time getting to those parts.