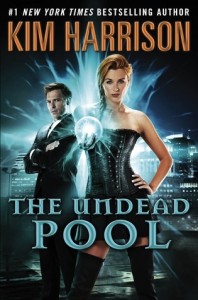 Witch and day-walking demon Rachel Morgan has managed to save the demonic ever after from shrinking, but at a high cost. Now strange magic is attacking Cincinnati and the Hollows, causing spells to backfire or go horribly wrong, and the truce between the races, between Inderlander and human, is shattering.

Rachel must stop the occurrences before the undead vampire masters who keep the rest of the undead under control are lost and it becomes all-out supernatural war. However, the only way to do so is through the ancient elven wild magic, which carries its own perils.

It did not seem like the problems that have fallen on the Hollows and Cincinnati are directly related to Rachel in this book!  Normally there is someone or something out to get her, but this time the bad guys are more focused on taking control of the city from the undead.  Due to experience, Rachel immediately thinks it has something to do with her and begins working the case right away.  Everyone gets drawn in, even Trent when it appears that wild magic is involved.

I was so excited to dig into The Undead Pool!  Rachel Morgan and the Hollows is one of my original Urban Fantasy series that got me hooked to this genre.  So much has happened and each book has so much action!  Most of the previous books have focused on something about Rachel that the world or the ever-after will not tolerate, so to have her almost responsibility free was different.  I liked how Rachel took charge in this installment and how strong she has become.  Most of the book goes by without her having to give up part of herself to someone to save someone else, as usually happens.

My favorite part?!  The scene I have been waiting forever for happens in this book.  I was so excited I literally jumped up and down.  I did not, however, really like the mystics.  They reminded me of Jenk’s kids on steroids and I had a hard time keeping track of when it was Rachel talking or the mystics.  I’m glad I did this as an e-book because I think the audio would have had me really confused.

I don’t care how crazy everyone says Newt is, I think she is saner than they all think.  She knows what is going on, just doesn’t always help out by giving out information.  I enjoy her character and she brings some fun into the situations.  We had multiple evil villians in this book and I am including Ellasbeth in that count as I cannot stand that elf.  We did not get to see much of Quen, and when we did I felt like he spent more time catering to Ellasbeth.  But then, it was probably more for the girls.

After this thrilling ride, I am so content with the ending of The Undead Pool, that I would be ok with this being the last book in the series.  I mean, the next book is the last anyway, right?  So let’s end it here, where I am happy and I think most of the characters are happy.  I don’t think I could stand it if any of this falls apart.  I will miss this series when it ends though.  The Hollows series has been an auto-buy every year and it will be sad when I no longer get a delivery every February.  What is it with the number 13?  Kelley Armstrong, another favorite of mine ended her Women of the Otherworld at 13 as well.  What a crappy number!