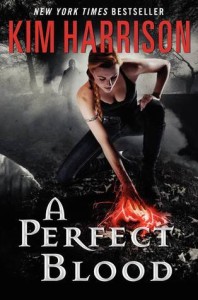 Ritually murdered corpses are appearing across Cincinnati, terrifying amalgams of human and other. Pulled in to help investigate by the I.S. and FIB, former witch turned day-walking demon Rachel Morgan soon realizes a horrifying truth: a human hate group is trying to create its own demons to destroy all Inderlanders, and to do so, it needs her blood.

She's faced vampires, witches, werewolves, demons, and more, but humanity itself might be her toughest challenge yet.

Rachel has really seemed to mature through the series and is finally seeing things with a little bit of gray.  She is more accepting of herself and is more open to the idea that she is a demon.  Now if she could just get her license and car registration.  I think Rachel is just destined not to be able to drive.
I wish that Rachel didn’t assume that just because Ivy and Jenks are making new relationships, that they are leaving her behind.  She made the decision to be Ivy’s friend.  Is her jealousy because Ivy has a new relationship or because that relationship is not with her?  They will still be able to live, work and play together even if Ivy and Jenks have romantic relationships.
Al is not a big player in this book.  Trent is working hard to come up with a way for Rachel to get her magic back without Al dragging her into the ever after for good.
I think that Trent’s determination to help Rachel shows that he cares more about her than he is letting on.  I really question Trent’s relationship with Ceri.  I thought she was in love with Quen, but it seems she is more of a couple with Trent, than Quen.  I think the only alternative left for a love relationship is with Al, but that would mean spending most of her time in the ever after.  I just don’t want to see that happen.  The opportunity is there for Rachel and Trent, I just hope that they take it and let their relationship grow.
Some new characters are introduced that will likely carry on into future books.  Will this group work with or against Rachel?  She desperately needs to prove herself to the FIB and IS, is she going to have to do the same for these people or will they be more accepting of her demon blood?

It took me awhile to finally finish this book.  Mostly because I was distracted and didn’t get a lot of time to read.  Frustrating because now I’m behind.  I have the new Elemental Assassin, By a Thread, by Jennifer Estep,  already downloaded, plus I wanted to try and read A Princess of Mars by Edgar Rice Burroughs, before I see  John Carter.  I have the John Carter book in paperback, but I think I’m going to have to get it on Amazon as I tend to have my kindle with me all the time and carrying the extra book is just a hassle.  I have to get through these two quickly though, as J.R. Ward’s Lover Reborn is coming out the end of the month and I really wanted to re-read Lover Unleashed before release day.
So tell me, what did YOU think of  A Perfect Blood?