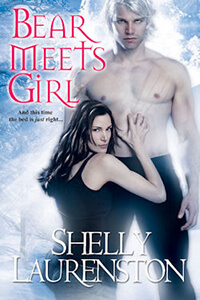 He's big, burly, and way smarter than your average shapeshifting bear. He's also about to get trapped by own his game. . .

Lou Crushek is a reasonable, mellow, easygoing kind of guy. But once someone starts killing the scumbags he works so hard to bust, that really gets under his fur. Especially when that someone is a curvy she-tiger with a skill set that's turning Crush's lone-bear world upside down--and bringing his passion out of hibernation. . .

As a member of an elite feline protection unit, Marcella Malone has no problem body-dropping anyone who hunts her kind. But Crush is proving one major pain in her gorgeous tail. The only reason she's joined forces with him is to track down the wealthy human who's got her entire species in his ruthless sights. It sure isn't because Crush's stubborn and contrary attitude is rubbing Cella in all the right ways. .

I’m back to my TBR binge of the Pride series with Bear Meets Girl. Marcella Malone has been introduced in previous books as a tough, counterpart to Dee-Anne Smith. Bare Knuckles Malone is also enforcer of the Carnivores hockey team as well as contractor for KZS, the cat run version of the Group. We really get to see another side of Cella in Bear Meets Girl. She’s still the tough killer that she has always been, but she is also loyal, smart, and funny.

Lou Crushek is a polar bear that has just been transferred to the “special” NYPD unit because his cover has been blown as an undercover agent. He becomes Dez McDermott’s partner. One night of too many jello shots at McDermott’s place and he winds up naked with a naked tiger draped over him. Cella takes it all in stride and does her best to drive Crush insane.

Bear Meets Girl is dealing mostly with the bear’s group and finding a guy that could help bring down the rein of their leader. NYPD, the Group and KZS are all working together again to find this guy. They also run into a problem with someone killing shifters and creating stuffed versions. I think that problem was dealt with and the bears dealt with the taxidermy guy.

The romance in this installment was a slow growing thing. There was no insta-love going on and at the beginning poor Crush has to learn to deal with Cella and her idea of fun. Annoying people is one of her favorite things to do. It was a lot of fun seeing Crush’s obsession with hockey and his adoration for Cella’s family as well as the current players of the Carnivores team. He even becomes friends with someone no one else can stand.

I enjoyed the back and forth of all the characters. It is fun to see them from previous books. I am getting kind of annoyed by Blayne as her incredible hyperactivity drives me as crazy as Cella and Dee-Anne, but it is also really amusing to see how she tries to help everyone and get friends for Bo.

Bear Meets Girl has a really fun romance as well as some great action with the mysteries. I love seeing the teams all work together. Marcella and Dee-Anne’s relationship is just crazy and the two made me laugh at their hot and cold moments all the time. This was definitely a fun installment and I’m really enjoying my trip through this series.

Review ~ A Kiss Before Doomsday by Laurence MacNaughton @LMacNaughton