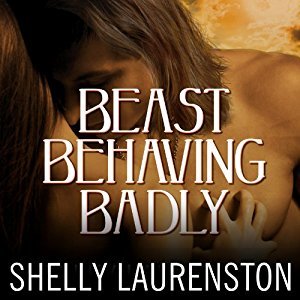 Ten years after Blayne Thorpe first encountered Bo Novikov, she still can't get the smooth-talking shifter out of her head. Now he's shadowing her in New York-all seven-plus feet of him-determined to protect her from stalkers who want to use her in shifter dogfights. Even if he has to drag her off to an isolated Maine town where the only neighbors are other bears almost as crazy as he is...

Let sleeping dogs lie. Bo knows it's good advice, but he can't leave Blayne be. Blame it on her sweet sexiness -- or his hunch that there's more to this little wolfdog than meets the eye. Blayne has depths he hasn't yet begun to fathom -- much as he'd like to. She may insist Bo's nothing but a pain in her delectable behind, but polar bears have patience in spades. Soon she'll realize how good they can be together. And when she does, animal instinct tells him it'll be worth the wait...

I was so excited to get Blayne Thorpe’s story! She is SO excitable, fun and empathetic. She won me over in Gwen’s book. Blayne is a constant source of the giggles for me. When the author paired Blayne up with a bear hybrid who had a crazy OCD issue, I was instantly fascinated on how these two were ever going to find a spot in the middle of the road where they could co-exist as a couple.

Blayne gives off an impression that she is not really serious about anything, but she knows a lot more than she lets on. For Beast Behaving Badly, Blayne is in the crosshairs of a group who are collecting hybrids for their own little fight club. The Group, as they are known are secretly using Blayne as bait. They have Deanne Smith following her and Blayne delights in torturing the she-wolf. She knows she’s being followed but is not really sure why.

Bo Novikov is obsessed with hockey and schedules. Blayne totally upsets his life but he cannot seem to help himself. Luckily he is in the right place when the men from the fight clubs makes a play for Blayne. Surprisingly, Blayne exhibits some skills you wouldn’t expect from her!

The pair end up in Maine and Blayne wins over a whole town of bear shifters. She knows how to work people and get what she wants! I loved getting to see her make everything work to her expectations. Beast Behaving Badly was such a fun story and seeing the changes she was able to make in Bo was amazing. I have to say, so far, I think that Bo & Blayne are my favorite pair in the series. The wolfdogs are perfect for getting the laughs. This was book was great for getting rid of all the stress of work on my way home! I don’t know how I’ve read this genre for so long and not read this series!