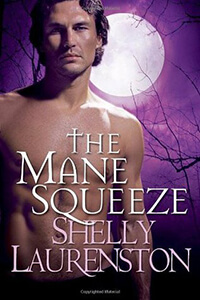 Growing up on the tough Philly streets, Gwen O'Neill has learned how to fend for herself. But what is she supposed to do with a nice, suburban Jersey boy in the form of a massive Grizzly shifter? Especially one with a rather unhealthy fetish for honey, moose, and…uh…well, her. Yet despite his menacing ursine growl and four-inch claws, Gwen finds Lachlan "Lock" MacRyrie cute and really sweet. He actually watches out for her, protects her, and unlike the rest of her out-of-control family manages not to morbidly embarrass her. Too bad cats don't believe in forever.

At nearly seven feet tall, Lock is used to people responding to him in two ways: screaming and running away. Gwen-half lioness, half tigress, all kick-ass-does neither. She's sexy beyond belief and smart as hell, but she's a born protector. Watching out for the family and friends closest to her but missing the fact that she's being stalked by a murderous enemy who doesn't like hybrids…and absolutely hates Gwen. Lock probably shouldn't get involved, but he will. Why? Because this is Gwen-and no matter what the hissing, roaring, drape destroying feline says about not being ready to settle down, Lock knows he can't simply walk away. Not when she's come to mean absolutely everything to him.

So I continue on my binge of everything Pride related by Shelly Laurenston. This time it is a hybrid lion/tiger heroine with a grizzly bear. You wouldn’t think these two would connect, but do they ever!

Gwen is ready to start her life on her own, away from her mother’s watchful eye. Her chance to get out arises when her bff Blayne wants to move to New York and take over her father’s business. Roxie O’Neal’s pride had never taken to Gwen anyway so this was the perfect opportunity for Gwen to prove herself. I love the profession that Gwen and Blayne get into. I also really loved Mitch’s reaction to his baby sister being on her own! Then Mitch really escalates his protectiveness when he finds out that she is spending her time with a grizzly bear. Honestly, I loved whenever Mitch & Brenden came across Lock. Their over-the-top actions had me laughing out loud.

Lachlan McRyrie is our introduction to the bears. His insane love of honey and salmon and his laid back attitude just drew me in. He was so calm and unconcerned about everything. Except when it came to Gwen. He was determined to protect her. He was a little confused on how to properly get Gwen into his clutches. When I think of him I want to just say “awww silly bear”! Not something one would normally say about a 7 foot grizzly shifter, but just his tone and attitude make me think of him as so relaxed. It is so opposite from Gwen, who seems to be on edge all the time.

Gwen and Lock come together in a fabulous story of love in the midst of hybrid haters and derby. It was a light, delightful listen! I was excited getting to learn more about the bears and look forward to more of them. I also fell in love with Blayne. She’s a crazy wild dog / wolf shifter and she’s just as nutty as the rest of the wild dogs in the series. She fits in perfect with Jess Ward Smith’s pack! Even better, she is up next in the series and I am SO excited for her story!