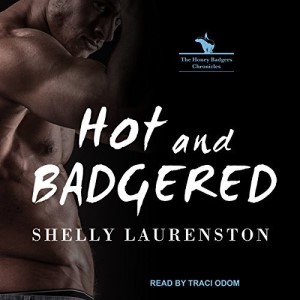 It’s not every day that a beautiful naked woman falls out of the sky and lands face-first on grizzly shifter Berg Dunn’s hotel balcony. Definitely they don’t usually hop up and demand his best gun. Berg gives the lady a grizzly-sized t-shirt and his cell phone, too, just on style points. And then she’s gone, taking his XXXL heart with her. By the time he figures out she’s a honey badger shifter, it’s too late.

Honey badgers are survivors. Brutal, vicious, ill-tempered survivors. Or maybe Charlie Taylor-MacKilligan is just pissed that her useless father is trying to get them all killed again, and won’t even tell her how. Protecting her little sisters has always been her job, and she’s not about to let some pesky giant grizzly protection specialist with a network of every shifter in Manhattan get in her way. Wait. He’s trying to help? Why would he want to do that? He’s cute enough that she just might let him tag along—that is, if he can keep up . . .

Hot and Badgered is book 1 in our spin off series from the Pride series by Shelly Laurenston. Our favorite shifters have become the main focus of their own series and that really excites me! Honey Badgers are tough as nails and crazy as hell!

In Hot and Badgered we meet three sisters, all half honey badger and running for their lives. They have a father that continually screws with their lives. The girls firmly believe he is behind the most recent attack on their lives. However, they are called to New York to identify what is supposed to be their father’s body at the morgue.

The MacKilligan sisters are awesome. We have Charlie who is the oldest and takes on the role of looking after her younger sisters. Don’t let the parental role fool you, she is a killer. You can’t deny the honey badger in her. She’s more responsible than the other two but does have her moments where she loses control. She likes to bake to calm herself which pleases their little community. Max is hell on wheels. She puts the “kill” in MacKilligan. That is her first response to everything. She has a smile that convinces everyone she’s a psychopath. Stevie is the youngest and a prodigy in music, math and science. For some reason the people chasing them want to keep Stevie alive. I loved these girls! They have more problems than regular shifters due to their father’s crappy genes but those problems make the girls much more interesting.

Berg Dunn is SO opposite Charlie. He is a big teddy bear and Charlie is uncertain about pulling him into the girl’s crazy life. But he is determined to protect them. He knows right from the start Charlie is his, but he is patient.

Another big plus is the addition of characters from the Pride series. Hot and Badgered continues on a few years after the last Pride book so we get to see where some of our favorite characters are now. That pleased me. I was so happy to see these characters again.

I will admit, I was disappointed that Charlotte Kane did not narrate this book. I’m used to her from bingeing the Pride series and Traci Odom and her version of my favorite Pride characters really threw me off. I thought I would adjust, but I really didn’t. I was excited to see that Charlotte Kane will be back in the next installment!