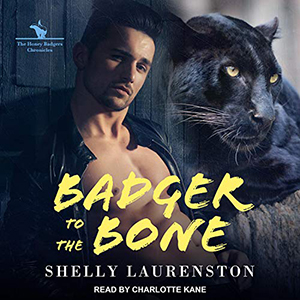 She’s the woman he’s been hired to kidnap. But ZeZé Vargas has other ideas . . . like getting them both out of this nightmare alive. Just one problem. She’s crazy. Certifiably. Because while he’s plotting their escape, the petite Asian beauty is plotting something much more deadly . . .

Max “Kill It Again” MacKilligan has no idea what one of her own is doing with all these criminal humans until she realizes that Zé has no idea who or what he is. Or exactly how much power he truly has.

But Max is more than happy to bring this handsome jaguar shifter into her world and show him everything he’s been missing out on. A move that might be the dumbest thing she’s ever done once she realizes how far her enemies will go to wipe her out. Too bad for them Zé is willing to do whatever it takes to keep her alive . . . and honey badgers are just so damn hard to kill!

I was looking forward to Max “Kill It Again” MacKilligan’s story. She’s been the sister with the violent streak and I wanted to see what kind of male could help us see a vulnerable side.

It was a lot of fun to see Max’s basketball team. They all had great personalities and it was a great opportunity to introduce more characters. I don’t know if that means the series will continue now that the sisters have all had their stories. The girls all share that violent streak that Max has and they have been working for years doing side jobs. The problem is that Charlie has no idea about this side life that Max has been having.

When Max is caught up in a job and finds herself saving ZeZé Vargas. I found I was not a big ZeZé fan. How could you get to his age and NOT know you were a shifter? I was thinking a lot about Stevie and how her animal comes out when she gets really angry. Wouldn’t that happen to ZeZé?

I also did not feel a lot of sparks between Max & ZeZé. It was kind of a slow simmer until they finally decided it was more than just friendship. Max had a lot of introduction to do to bring ZeZé up to speed about living in the shifter world. So more time was spent on that than the romance.

More daddy problems plague the girls and it all comes to a culmination with a big surprise. This makes me think there will definitely be another book. Despite the lack of adrenaline I felt with Badger to the Bone, I am still excited to continue on with the whirlwind these sisters bring.