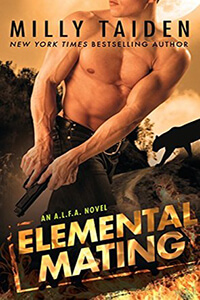 Their existence was a secret the government stumbled upon. In exchange for continued autonomy, the paranormals entered an alliance with the government. Now they are A.L.F.A.: Alpha League Federal Agency, sworn to protect and serve humanity.

Brilliant scientist Melinda Caster has discovered a new strain of the Zika virus that stimulates synaptic growth in embryos, causing neuron development beyond normal human levels. Way beyond, like ESP-levels of cognitive abilities. When the lab is broken into, Melinda realizes that someone has been keeping tabs on her research and wants it for themselves. A happy accident destroys critical data before it can fall into the wrong hands, but unfortunately that makes Melinda and her perfect memory a target.

A.L.F.A sends in jaguar-shifter Agent Parish Hamel to discover who is after the virus and why. The beautiful scientist acts like catnip to his senses and throws his mating instincts into overdrive. And then she disappears along with the only sample of the virus…. Now Parish must canvas the darkest areas of the supernatural underground to rescue Melinda, and what he discovers is beyond a paranormal’s worst nightmare.

Elemental Mating is the first book in Milly Taiden’s A.L.F.A. series. This is also my first experience with this author. A.L.F.A. is a group of secret agents that work for the government. The government knows they are shifters while the world is kept in the dark that they exist. The government uses their special skills on dangerous missions in exchange for leaving the shifters from being outed.

In Elemental Mating, we travel to Uganda where Melinda Caster has discovered a virus that gives infants ESP gifts. Unfortunately they are still working on it when they find that the virus has a high death rate after the special gift is used excessively. Melinda really doesn’t think her virus is worth national security so is surprised when someone is sent to watch over her project. She is not pleased to have to work with someone from this organization.

Parish Hamel is no scientist, and pretending to be one is actually harder than he thought it would be. His attempts at following Melinda’s conversations about her project were funny. However, his lack of scientific terminology strikes Melinda as odd. Hamel’s job is to protect Melinda’s project as there is information about it that could lead dangerous people to try and get a hold of it.

It was interesting that Hamel himself just gets introduced to a new paranormal species he thought didn’t exist. Now he has to be as open-minded as he needs his mate to be when he explains he is actually the panther she has fallen in love with.

Eternal Mating was a quick read. The world was fairly simple to get to know. There wasn’t an overload of world-building information so we were able to get right to the story. I found it interesting that Milly Taiden’s heroine’s are not your usual Barbie doll imitations, but portray real women.

The time the couple spent in the other dimension was interesting and we seem to setup a connection there that could benefit A.L.F.A. in the future.

I enjoyed the romance between our main couple, and thought it was cute how Hamel used his panther to get close to Melinda. The virus storyline was definitely interesting and the impact it could make in the wrong hands is shocking. I did not suffer from book one syndrome with this book and I’m excited to start book two. Elemental Mating is a great start to a new series. 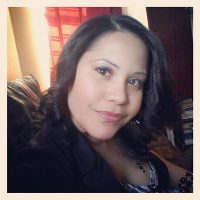 Milly Taiden (also writes as April Angel) was born in the prettiest part of the Caribbean (to her) known as the Dominican Republic. Currently, she resides in New York City with her husband, bossy young son and their little dog Speedy.

When she’s not working full-time, texting with her best friend Heidi in England, chastising her son for pulling the dog’s ears, shopping with her sister Jewel or watching scary movies with her husband, she can be found writing on her laptop.