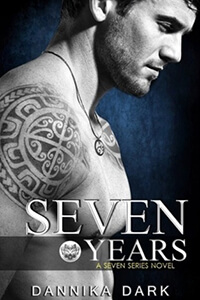 It's been seven years since Lexi Knight lost her brother in a tragic accident. On the anniversary of his death, her brother's best friend shows up unexpectedly - a man she hasn't seen since the funeral. He is no longer the boy Lexi once knew, but a dangerous-looking man with tattoos and dark secrets. He broke her trust and abandoned her family, yet what he reveals makes it impossible to stay angry. Lexi has been secretly infatuated with Austin since childhood, so finding out he's a Shifter just makes him sexier. Dammit.

Austin Cole has returned to the city where he grew up, and just in time. He's lived a hard life these past seven years, and the shadows of his past are threatening to destroy Lexi's family. It's time that she learned the truth about her brother, but there is a shocking twist that Austin never saw coming. Now he must protect her family when her mother and sister wind up in mortal danger. Will Lexi learn to accept the truth about who he is, and can Austin salvage a relationship from the ruins of their past?

Destiny will find you.

I have been sucked into Dannika Dark’s world and am on a binge of her work. There are the three series, Mageri, Crossbreed and Seven. They all appear to be set within the same world. Seven focuses on the werewolf breed.

Alexia Knight lives in a small town working for the local candy store. She was really close to her brother who had died seven years ago. West had a best friend at the time that was more like family for Lexie and he disappeared right after West’s death. Suddenly, as Lexie’s family commemorates the anniversary of West’s death, the best friend, Austin Cole returns to town.

Lexie experiences a lot in Seven Years. From crazy exes, to finding out new things about herself and the world around her, her story takes you through a roller coaster. Amongst the chaos, is the attraction she still feels for Austin. She fights it with the excuse that it is not returned and is just a crush from her younger years. She also felt betrayed by his disappearance and had to deal with that.

I felt Seven dealt more with the romance than the surrounding problems. The disappearance of Lexie’s mother even gets given to someone else to investigate so our focus stays on Lexie and Austin. I enjoyed having a little bit more romance in the mix after listening to the Mageri and Crossbreed series. It was good to have an HEA. I had been missing the romance and hopefully listening to Seven Years before the newest in the Crossbreed series, Gaslight, my need for a good romance story will be appeased. There is an ongoing romance of sorts in Crossbreed, but it is not a focus.

I really enjoyed the characters in Seven Years. Despite Lexie’s issues, her sarcastic attitude had me laughing. Their story is so romantic. Meeting Austin’s pack and just living through Lexie’s experiences was exciting and dramatic. I’m hoping to get to know more of the side characters in upcoming books. It was really fun with the author connecting music with the characters, so now when I think of certain songs, I think of either a certain event or that character. Dark’s writing and Poole’s narration keep me glued to the book and have me making sure the next installment is downloaded and ready to start the minute I finish my current one.