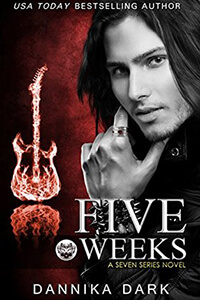 Izzy has always loved the freedom and adventure of life on the road, but she’s recently decided to settle down—as much as a rogue wolf can. When her boyfriend gets her a job working at a hot Shifter bar, she runs into the last person on earth she expected to see again.

Jericho isn’t the famous rock star he once was, though he still plays in a local band and loves to party. Beautiful women come and go, but music is his only passion—until a sassy redhead named Isabelle Monroe shows up unexpectedly.

Fate reunites two former friends living with one foot in the present and the other in the past. But will they have a future when one of them is forced to choose between life and death? Old habits die hard, and sometimes the toughest addictions to shake are the ones that control our hearts.

Five Weeks features Jericho and Izzie. Jericho is the musician of the Weston pack with women falling all over him. He has recovered from some things in the past but is still a bit of a partyer. He spent some time with a girl named Isabelle who he never really got over. Imagine his surprise when he gets a blast from the past.

Isabelle is not one for staying in one place. Her and her boyfriend end up in Austin and Izzy insists on getting a job. She ends up working in a bar where she gets her blast from the past. Izzy and Jericho’s split was seen differently by both of them and according to the Weston pack, Izzy is the girl that stole from Jericho and left him overdosing in a hotel room. Despite that being what Jericho thinks happened, he is drawn to Izzy and starts to fall back into the easy friendship they had when they were younger.

Izzy’s boyfriend ends up being a problem, and not just in the sense that he was in the way of a relationship starting. Izzy is not that kind of girl but can she be too forgiving.

I loved the way Jericho and Izzy worked their way back to a friendship and gradually realizing that they always had feelings for each other. Stronger than friendship feelings. Feelings that could save Izzy when she ends up in a bad situation. It was such a sweet build on their relationship and they were just so cute together. The rocker and the band chick.

Izzie is a favorite character of mine. She has a great attitude, filled with spunk and sarcasm. She’s outgoing and willing to do anything to be independent. Jericho’s character works it’s way out so he goes from the prankster who spikes the punch at a pack party to a man who is sensitive and romantic.

This was definitely a favorite book in this series and Jericho and Izzie are a favorite couple. They just click for me. The Weston pack is growing with more than just Izzie and it’s good to see. I just loved Five Weeks and despite me not being a rereader, this is one I could possibly listen to again!

Waiting On Wednesday ~ Baby, I’m Howling For You by Christine Warren @ChrstineWarren @SMPRomance