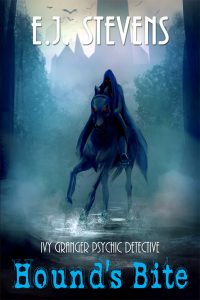 Ivy Granger thought she left the worst of Mab's creations behind when she escaped Faerie. She thought wrong.

In a cruel twist of fate, Ivy has unleashed a powerful horde of Unseelie beasts upon her city, turning her homecoming into a potential slaughter of innocents. Now Ivy must gather her allies to fight a reputedly unstoppable force—The Wild Hunt.

Will the training Ivy received in her father's court be enough to save her city, or will Harborsmouth be forced to kneel before the Lord of the Hunt? She is willing to risk her own life, but some sacrifices come at a cost worse than death. When an ally is bitten by one of The Wild Hunt's hounds, Ivy must face the possibility that winning this battle may mean killing the one person she has come to love most.

Hound’s Bite is the fifth book in the Ivy Granger series by E.J. Stevens. If you haven’t read the first four, I highly suggest you do.

Ivy’s life has progressed a lot during this series. She’s had a lot of growth and discovered a lot about herself. This knowledge has not come without a price. She’s been put through hell, and sometimes for nothing more than accidentally doing some things she didn’t know she could do.

After Birthright, Ivy comes back knowing a lot more about her heritage and what she can do. Now she should be able to navigate the supernatural world with fewer mishaps. Despite how long Ivy, Ceff and Torn were in Fairy, only a week has past in the human world. Ivy left Jinx without a word so she is expecting some backlash from that. Problem is, Ivy isn’t given time to do anything like explain herself.

Ivy returns to the human world, and finds out she’s been followed. The Wild Hunt has followed her from Fairy and the possibility of total war and destruction is very real. Ivy and her friends are on the run right from the start. She goes straight to her long-time friend and local witch, Kaye. Kaye’s been acting strange since her powers have been rejuvenated and Ivy is really concerned. She needs Kaye’s help to stop the Wild Hunt and plans to worry about Kaye later.

Nothing ever goes as Ivy plans. She gets hit with problem after problem without relief. I always leave these books out of breath, like I’ve run a race. The action never stops and there are so many ups and downs you are basically on a roller coaster from the word “go”. I love how strategic Ivy is, and how everyone looks to her for a plan. She knows a lot of people and how to include them in her plans.

There are some moments in Hound’s Bite that I was left with my heart in my throat. The tears were threatening. Oh, who am I kidding, I may have shed a tear or two. What is Ivy prepared to lose to save the world from the upcoming war?

We end up with some surprises that may lead to some interesting upcoming information. I’m excited to see how the romantic portions play out as well. Everyone has paired off except for Torn. I would really be interested in seeing if a character could pull off having a relationship with him. Then again, I don’t want him to change. His antics always leave me laughing.

The Ivy Granger series is one that will keep you rushing to try and keep up with all the turmoil surrounding Ivy. I would definitely recommend reading this series in order. I did have a hard time remembering some of the past events referred to in the story. Possibly because so much action happens so quickly it is hard to absorb all the details that are going to come back and bite Ivy.

Hound’s Bite was thrilling and exciting basically from start to finish. I highly recommend it! (After the first four books that is!)