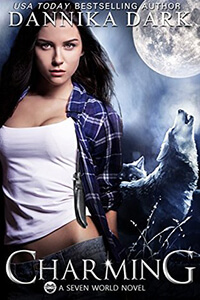 After seven hundred years, Prince has acquired everything a Packmaster could desire. But when he meets the enchanting Nadia Kozlov, he realizes there’s one thing he doesn’t have: answers. Prince owes his life to a man he hasn’t seen in centuries, and Nadia holds the key to his whereabouts, because that man is her father.

Destinies collide when Nadia’s sister shows up unexpectedly. Katarina is a skilled bounty hunter, hot on the trail of a nefarious outlaw who turns out to be Prince’s old nemesis. Prince teams up with Nadia’s sister to track down the Mage, but the real game of cat and mouse is already underway as sparks fly between Prince and the cunning bounty hunter.

The only trouble? Nadia wants him too.

"Most men can only handle me in small doses."

Charming is set in Dannika Dark’s Seven world. This book features the Pack Master Prince who we got to know in the series. We were left in one of the Seven books with Prince leaving the Weston pack offering Nadia a lift home after she gets rejected by Denver. Prince recognizes Nadia’s last name and realizes she may have the ancient blood he needs for a strong alpha mate. That was where we left them.

Now this book is listed as #6.5. I didn’t listen to it until after book #7. I was too excited for One Second. Listening to this out of order did not spoil anything nor did One Second spoil anything in Charming. Pretty much completely separate.

As we know from Denver and Maizy’s book, Prince is an ancient. They are more pure blooded than most other shifters. Prince wants a mate that has that pure blood for his mate to create a strong bond and great, alpha cubs. Finding out Nadia’s lineage has put her on his list to have. I was worried about this at first because Nadia was definitely not a character I cared for. But when he meets her twin, suddenly Prince’s options have opened up. Katarina is completely opposite Nadia and I really enjoyed her character. She was kick-ass and funny. Nothing like Prince, but slowly Kat starts to rub off on him and he loosens up a lot. Kat is a bounty hunter, living on the road, tripping over her shoe laces and searching for her father. This was perfect, as Prince would love to find their father too. Common goal, so of course they work together. It was kind of awkward at first because he was sort of dating Nadia. Or the belief was that he was interested in Nadia. Once everyone realized Nadia was not meant for him and he made the decision to pursue Kat, that strange triangle feeling went away.

During the story, Kat and Prince are chasing a mage that is their prime suspect. He is also someone from Prince’s past. For a few scenes, I thought maybe this villian was after Prince now that he knew where he was, but eventually it all fell into place. The more information the mage had, the more greedy he was on getting revenge and finding what what was stolen from him. The stakes keep getting higher and Prince and Kat must work fast to find this mage and save her family.

I loved seeing Kat & Prince together. Kat brought out a different side to Prince that was definitely more fun. It was exactly what he needed, and she appears to be exactly what his pack needs. This would be an interesting couple to see more of, but alas, the series has ended. I am sad, because I truly enjoyed the Seven series. I’ve only got one novella left and then I’m officially caught up.