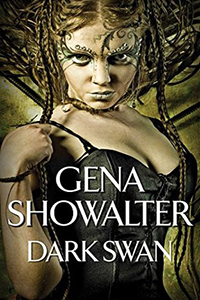 Lilica Swan isn’t quite human or otherworlder; she is the best—and worst—of both.

She is willing to do whatever proves necessary to save her sister from the seductive and deadly Alien Investigation and Removal agent, Dallas Gutierrez, even bonding her lifeforce to his by effectively marrying him. But the bond will fade without consummation. Can Dallas resist his insatiable desire for the powerful beauty? Or will she lead to his ultimate downfall?

Dallas’s story was one I had been anticipating since I read the series, oh gosh, a couple of years ago maybe? He was a wise ass, self-centered character who had a slight issue with some of his new abilities. His attitude made him a favorite and I wanted to see who would be able to tame him. Dallas was having a lot of visions and communications with Trinity, the Queen of the Schon, and I was hoping SO hard that he didn’t hook up with her. The introduction of Trinity’s sisters brought on a whole new meaning to some of Dallas’s visions.

Lilica was one of three sisters created in a lab with mixed alien heritage. They all had different abilities and were treated harshly in their lab environment growing up. The three are inseparable until Trinity contracts the Schon disease. Lilica and the third sister, Jade, are out to try and find her, thinking they can save her. We find Lilica as a prisoner of Devyn’s. Devyn is another of my favorite characters with his self-centeredness and general devil may care attitude. Once Dallas takes over the care of Lilica, they find themselves in a situation that brings them together win a way that is both good and bad for them.

I enjoyed Dark Swan and was really glad to have Dallas’s story. Even more glad he didn’t end up with Trinity. However, I didn’t have the connection with Dallas I had in the previous books. He wasn’t as off the wall outrageous as he was before. Lilica did temper his normal personality some. It is still there in places, but I didn’t feel it as strongly. It also could be that I haven’t read an Alien Huntress book in years and my feelings for him have diminished a bit. I felt like the story left off with a possible love connection that I’m wondering if it might potentially lead into another book. We’ll have to see!