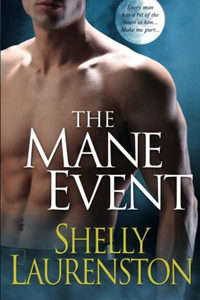 Mace Llewellyn. Brendon Shaw. Two tall, gorgeous, sexy alpha heroes who are 100% male―with a little something extra. Lion-shifters, to be exact, who can unleash every woman's animal side and still look good―make that spectacular―in a suit... and even better out of it...

NYPD cop Desiree "Dez" MacDermot knows she's changed a lot since she palled around with her childhood buddy, Mace. But it's fair to say that Mace has changed even more. It isn't just those too-sexy gold eyes, or the six-four, built-like-a-Navy Seal body. It's something in the way he sniffs her neck and purrs, making her entire body tingle...

Meanwhile, for Tennessean Ronnie Lee Reed, New York City is the place where any girl―even one who runs with a Pack―can redefine herself. First order of business: find a mate, settle down, and stop using men for sex. Even big, gorgeous, lion shifter men like Brendon Shaw. But she needn't worry, because now that Brendon's set his sights on her, the predator in him is ready to pounce and never let go...

The Mane Event by Shelly Laurenston actually includes two stories. There is the story of Mace Llewellyn and Dez MacDermott as well as the story of Brendon Shaw and Ronnie Lee Reed.

Mace and Dez knew each other growing up. Mace has always had a thing for Dez even though she believed they were just friends. He has been dreaming of catching up to her and making her his for many, many years. Dez is now a detective and is involved in a shifter case, not that she knows it. Unfortunately her antagonistic relationship with Mace’s sister bumps her off the case and now her normal excuse for avoiding Christmas with her family is gone. It also gives Mace time to worm his way into Dez’s heart. The back and forth between the two is a lot of fun. Mace is very determined and can really push Dez’s buttons. Her reaction to learning her best friend is a lion went over fairly well. Considering Dez is a dog kinda gal. Mace must work past family squabbles and over-protective friends that will make you laugh to get his true love to fall for him. Not to mention convincing a couple of well-trained dogs to get over their fear and get used to him. Not that Mace really wants to accept the dogs, but he’ll put up with them. Maybe after giving them a few scares to keep them in place! I loved Dez’s dogs and their reaction to Mace. They really gave me a good laugh. Mace and Dez made a great pair. Mace’s self-confidence and Dez’s desire to not to let anyone in brought on some great scenes. You can’t help but love Mace!

Brendon Shaw is another lion. I’m still working out what being a male in a Pride actually means. Mace was downright against it and Brendon had a special contract that kept him out of the full responsibilities of being in a Pride. Which comes in very helpful when he falls for the she-wolf who helps rescue him from a bad situation. Ronnie Lee sits with and takes care of Brendon when the females who are supposed to be in his Pride pretty much abandon him in the hospital. From the time he wakes up he is pretty much set on making Ronnie his. Even is she is a wolf. Ronnie has decided she is going to settle down and stop her crazy, partying ways. Which includes jumping into meaningless relationships with men. However, Brendon really pushes her resistance. I enjoyed Ronnie’s character. She was a lot of fun and her inner dialogue and turmoil made me laugh. Brendon really had to be tricky about trying to make Ronnie his, as well as figure out what his baby brother was up to. Brendon & Ronnie’s story was entertaining and had me wanting to know more about how this world works.

The narration of The Mane Event was really well done. I loved how well each of the different accents were done. The pace and inflections of each of the voices really increased the entertainment of the book.

The Pride series is now my next series audio binge so watch for lots of reviews on the stories. I hear this is a really fun and humorous series and I’m looking forward to what is to come!