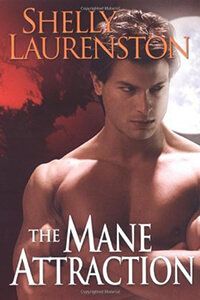 Weddings have the strangest effect on people. How else to explain the fact that Sissy Mae Smith woke up in Mitch Shaw's bed the morning after her brother Bobby Ray tied the knot? Or that gunmen are trying to kill Mitch, and Sissy Mae now has to escort a bleeding, stubborn, yet still incredibly sexy lion shifter to her Tennessee Pack's turf to keep him safe? It doesn't help that Mitch's appraising gaze makes her feel like the most desirable creature on earth, or that the ultimate stray cat is suddenly acting all kinds of possessive. Mitch is an undercover cop who's about to testify against some dangerous ex-associates.

Even more worrisome, he's harbouring hot, X-rated fantasies about the fast-talking little canine - and he has to deal with every male in Sissy Mae's Pack sniffing around her in a way that makes his hackles rise. Mitch has his pride, and he intends to show Sissy Mae that when a lion sets out to make you his mate, the only thing to do is purr, roll over, and enjoy one hell of a ride.

In this third installment of the Pride series, we have Mitch, who is a lion with a bounty on his head. When someone finds him and takes a shot at him. Sissy Mae steps in to take him somewhere safe. Her hometown of Smithtown. She’s not exactly welcomed there but it would be the last place anyone would look for Mitch.

Mitch and Sissy had been playing on the friendship side for awhile now, but between all the craziness they have to deal with in Smithtown, they are drawn to a more intense relationship. They try to stay within the boundaries that Sissy Mae sets, but it isn’t long before they are finding themselves crossing those boundaries.

The Mane Attraction spent a great amount of time in Smithtown with all the problems being around Sissy’s family caused and the relationship between Sissy and Mitch. There wasn’t a whole lot of progression towards the problem that had them in Smithtown to begin with. Those moments seemed to be thrown in in small doses just as a reminder. Mitch’s future is brought up a few times, but the danger he is in really isn’t an issue. But when it came down to it, everything fell into place in a fast-paced, crazy jumble of actions by everyone that had me riveted to my phone dying to know what was going to happen.

Mitch’s future is changed by outside forces that only take up a small scene in the book, but opens so many doors and finally gets rid of all those boundaries the couple thought they were living by.

The Mane Attraction was great fun and the actions of all the characters in that little Tennessee town kept me laughing. We did seem to focus more on Sissy’s problems in Smithtown versus Mitch’s problems and why they were there, but I think Sissy’s side was more fun. This series seems to bring out a lot of silliness and fun. The narration was great with the southern accents and I enjoyed it a lot. I’m so curious about all the other characters being introduced!