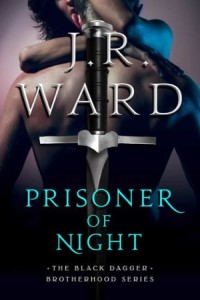 When Ahmare’s brother is abducted, there is nothing she won’t do to get him back safely. She is unprepared, however, for the lengths she will have to go to save his life. Paired with a dangerous but enticing prisoner, she embarks on an odyssey into another world.

Duran, betrayed by his father, imprisoned in a dungeon for decades, has survived only because of his thirst for vengeance. He has been biding his time to escape and is shocked to find an unlikely and temporary freedom in the form of a determined young female.

Battling against deadly forces and facing unforeseen peril, the pair are in a race to save Ahmare’s brother. As time runs out, and the unthinkable looms, even true love may not be enough to carry them through.

I skipped Prisoner of Night when it was released. It could have been that it was a Brotherhood world book without the Brother’s and I just wasn’t that excited. However, I didn’t feel like I was caught up on the Black Dagger Brotherhood series without reading this book. So I snagged it on Audible to fix that.

Ahmare is a female with a dim witted brother. He was selling drugs and ripped off the wrong guy. The brother ends up a captive being tortured and Ahmare must save him. She does things that affect her deeply. She is not a warrior so what she must do for her brother are totally outside of her normal skill set.

Duran is the “weapon” provided to Ahmare to help complete one of her tasks to free her brother. After expecting guns or knives, being sent out on her mission with a prisoner wasn’t something she expected. I felt like Duran accepted his fate and went along with Ahmare’s task too easily. He didn’t fight against her, or try to get away. His initial reaction to her screamed mate, but he didn’t seem to comprehend it. That made it harder for me to believe that he was just going to walk out and not try to escape. Duran has had a horrible past, then top that off with two decades of torture he deserves to be pretty cranky. But he is calm and calculated as they go about their mission.

I thought Prisoner of Night was supposed to be a novella, but it was actually over 6 hours of listening so I think it was pretty long for a novella. The fact that it was not insta-love in a short story was nice. The relationship growth has some stumbles and yes, maybe some tears. You never know with J.R. Ward what she is going to pull on you. I enjoyed what we got to learn about the characters. This is kind of strange, but I’m glad that we eventually see just how screwed up Duran really is from all he’s been through. I was having a really hard time believing someone could go through what he had without being terribly affected.

Prisoner of Night was a nice addition to the Black Dagger Brotherhood world and I’m glad I took the time to listen. It is great as a standalone, although you don’t learn much about the world. I don’t think you really need to though so it works out. The BDB are barely mentioned at all.

Jim Frangione narrates Prisoner of Night and he is fast becoming a favorite narrator for me. I’m getting used to a male narrator, as they were rare for me. Frangione does amazing though and you can really envision the characters through his voice. He is going to make it tough to decide on whether I continue to read the Black Dagger Brotherhood books as usual, or switch to listening to them.