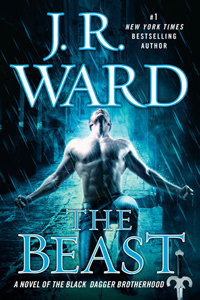 Nothing is as it used to be for the Black Dagger Brotherhood. After avoiding war with the Shadows, alliances have shifted and lines have been drawn. The slayers of the Lessening Society are stronger than ever, preying on human weakness to acquire more money, more weapons, more power. But as the Brotherhood readies for an all-out attack on them, one of their own fights a battle within himself…

For Rhage, the Brother with the biggest appetites, but also the biggest heart, life was supposed to be perfect—or at the very least, perfectly enjoyable. Mary, his beloved shellan, is by his side and his King and his brothers are thriving. But Rhage can’t understand—or control—the panic and insecurity that plague him…

And that terrifies him—as well as distances him from his mate. After suffering mortal injury in battle, Rhage must reassess his priorities—and the answer, when it comes to him, rocks his world...and Mary’s. But Mary is on a journey of her own, one that will either bring them closer together or cause a split that neither will recover from...

I was not a big fan of The Shadows. I don’t know if it was the way it ended, or that I had it spoiled for me. Either way, I was not happy with how it ended. I closed that book sitting on the fence of reading anymore in the series. Most of the Brother’s had had their HEA’s. We were down to the Shadows now, so really how much more could there be? Then here comes another Rhage book. No one, and I mean NO one, was going to keep me from reading another book about Rhage.

We know from the previous books that something is bothering Rhage. He’s not himself. I had to know what was weighing on my favorite Brother’s mind. In The Beast, I feel like we still get to see some of the goofy Rhage I had come to love, but we also see him on a much deeper level. We’re digging below the surface exterior of tough, Lesser fighting, Tootsie Pop sucking bad boy. He’s settled into his life, or so we think. He is just not the same and his actions prove that.

Mary’s actions and thoughts also have us wondering just what the heck is going on with this couple. When they are together they seem to be the same pair, but you can tell that both of them are holding guilt and secrets. I’ll admit, I was a little perturbed by Mary’s whole mindset between her job and her feelings for her hellren. He should have come first. I know her job involves working with the survivors at Safe Place, but there are more employees than just her. Anyway, I was annoyed with her inner dialogue when choosing between the two.

When we finally narrow down the cause of Rhage and Mary’s disconnect, their world seems to even out. They get on the same page. Then their story turns into a sweet story of love and family. The time they spend together will make you laugh and cry. Even knowing the end, I still tear up a little. Their story ended just where I thought it should. I can’t wait to see how it all fits together in the household now.

As usual with a BDB book, we have multiple story lines. There was the Virgin Scribe, Assail, Xcor and Layla. I felt like we came to some good ending points on some of the stories and others were left so far up in the air, I don’t know where we can go with them. I think they are big enough that they can’t be just dropped off the series, they must be handled. Hopefully this means that there are quite a few more to go. I see The Chosen has already been announced for next year. The title makes me kind of nervous on which story lines Ward is going to focus on. I will be there though, with bells on, to pick up my copy.

The Beast made my heart melt and I was so excited to get another Rhage story. Some parts may have moved a little slow when it came to the couple, but it was still so darn sweet and happy. Rhage is definitely still a favorite Brother for me!

I just have to share this amazing story with all of you, so I’m going to give away one hard cover copy. Enter below to win. Don’t forget to check out the terms!