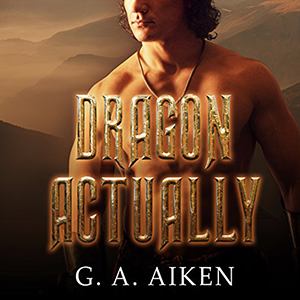 It's not always easy being a female warrior with a nickname like Annwyl the Bloody. Men tend to either cower in fear - a lot - or else salute. It's true that Annwyl has a knack for decapitating legions of her ruthless brother's soldiers without pausing for breath. But just once it would be nice to be able to really talk to a man, the way, she can talk to Fearghus the Destroyer.

Too bad that Fearghus is a dragon, of the large, scaly and deadly type. With him, Annwyl feels safe - a far cry from the feelings aroused by the hard-bodied, arrogant knight Fearghus has arranged to help train her for battle. With her days spent fighting a man who fill her with fierce, heady desire, and her nights spent in the company of a magical creature who could smite a village just by exhaling, Annwyl is sure life couldn't get any stranger. She's wrong...

Dragon Actually was two tales. A little backward in the presentation but I was glad to get the story of Fearghus’s family.

The characters in Dragon Actually were amazing. I loved seeing such strong women. Dragons are also a love of mine so along with great reviews I was excited to delve into the lives of these characters!

Anwyll The Blood and Fearghus the Destroyer were awesome. Fearghus knew fairly quickly that he wanted Anwyll and played some games with her heart and head. His desperation to have her made his family and me frustrated with him. It isn’t until his father shows up, and Anwyll proves she’s not some weak female that the truth comes out. I really loved Anwyll taking on Fearghus’s parents. She may be human but she is determined and strong. Strong enough to stand up to dragons.

We meet a lot of characters in Dragon Actually. I thought it was a lot of fun to see the variety of personalities of Fearghus’s family. I can’t wait to read each of their stories!

The second story was of Fearghus’s parents, Rhiannon and Bercelak. What a relationship that was! This tale explained a lot about the personalities of Fearghus’s parents. Both very strong-willed characters, plus one from royalty while the other from commoners. Bercelak had been certain for many years that he wanted Rhiannon and when he finally lucks out and is granted her, he will do what he needs to to make her want him. Rhiannon is put in a position where she really has to rely on Bercelak, but finds her walls crumbling. It really is a fun story and this couple really is so opposite. Rhiannon comes a long way but keeps a great deal of herself too. The way she changes to allow for their relationship while still keeping the essential part of her was really interesting.

Dragon Actually was a great listen, with an amazing narrator. The stories have me anxious to listen to more. I want to get to know all the other characters and see how these dragons come to find their mates!

New York Times and USA Today Bestselling author G.A. Aiken, Originally from Long Island, New York, lives on the West Coast and spends most of her time writing and making sure her rescued Pittie doesn’t love everyone into a coma. When she’s not writing about sexy dragons, she’s writing about sexy wolf, lion, tiger, and other fang-filled predators under the name Shelly Laurenston. Find out more about this New York Times and USA Today Bestselling authors books at www.shellylaurenston.com