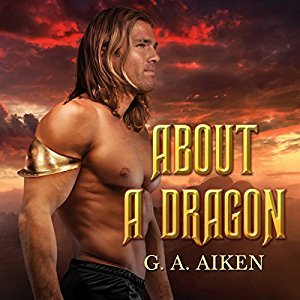 For Nolwenn witch Talaith, a bad day begins with being dragged from bed by an angry mob intent on her crispy end and culminates in rescue by - wait for it - a silver maned dragon. Existence as a hated outcast is nothing new for a woman with such powerful secrets. The dragon, though? A tad unusual. This one has a human form to die for, and knows it.According to dragon law, Talaith is now his property, for pleasure...Or otherwise. But if Lord Arrogance thinks she's the kind of damsel to acquiesce without a word, he's in for a surprise...Is the woman never silent? Briec the Mighty knew the moment he laid eyes on Talaith that she would be his, but he'd counted on tongue-lashings of an altogether different sort. It's embarrassing, really, that it isn't this outspoken female's magicks that have the realm's greatest dragon in her thrall. No, Briec has been spellbound by something altogether different - and if he doesn't tread carefully, what he doesn't know about human women could well be the undoing of his entire race...

In About A Dragon we get to see another of Rhiannon and Bercelak’s hatchlings, Briec the Mighty. He’s another dragon that prefers his own solitude in his den than to deal with humans. Other than maybe snacks. But when he meets and saves Talaith, he suddenly thinks she owes him.

His arrogance, that Talaith calls him on, made his character comical. He has no idea how to treat a human female and also has no intentions of taking her as mate as Fearghus did with his human. Plus, shouldn’t she be grateful that he saved her and give him what he wants? Oh no, no Talaith! She is super independent and wily. She’s been dealing with a secret for 16 years and it not going to let this dragon screw it up for her. But she finds that the back and forth arguments she has with this dragon to be stimulating. They are always arguing but both find that it just makes them each desire the other more. This is definitely a different type of relationship and was a lot of fun to see it develop. You couldn’t tell whether their arguments were going to lead to conflict or a trip to the bed.

Once Talaith sets out on her path, Briec finds himself devastated and blames Talaith for this crazy pain in his chest. He thinks she has hit him with a spell. His resistance to the fact that he may have fallen in love with her was pretty funny. He certainly has an arrogant attitude.

Talaith meets up with Annwyll and her group her life is irrevocably changed. Little does she know that she is not as far from Briec as she thinks. She must focus on her daughter though and making a new life for themselves instead of some feelings she has for a dragon.

I really enjoyed this couple and Talaith’s daughter was fun. I can’t wait to see the chaos she is going to cause. It was good that the family of dragons was brought together to protect Talaith. We also get a very big announcement regarding one of our couples. I think that is going to lead to quite a bit more story.

I’m having fun with this series and Hollie Jackson is doing a great job with narration. The character count is increasing as will the amount of voices the narrator is going to have to maintain, but so far it’s been good.

New York Times and USA Today Bestselling author G.A. Aiken, Originally from Long Island, New York, lives on the West Coast and spends most of her time writing and making sure her rescued Pittie doesn’t love everyone into a coma. When she’s not writing about sexy dragons, she’s writing about sexy wolf, lion, tiger, and other fang-filled predators under the name Shelly Laurenston. Find out more about this New York Times and USA Today Bestselling authors books at www.shellylaurenston.com