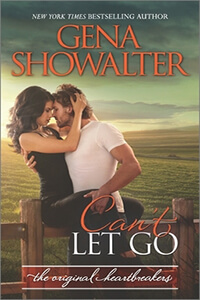 With trust issues a mile long, Ryanne Wade has sworn off men. Then Jude Laurent walks into her bar and all bets are off. The former Army Ranger has suffered unimaginably, first being maimed in battle then losing his wife and daughters to a drunk driver. Making the brooding widower smile is priority one. Resisting him? Impossible.

To Jude, Ryanne is off limits. And yet the beautiful bartender who serves alcohol to potential motorists tempts him like no other. When a rival bar threatens her livelihood, and her life, he can’t turn away. She triggers something in him he thought long buried, and he’s determined to protect her, whatever the cost.

As their already scorching attraction continues to heat, the damaged soldier knows he must let go of his past to hold on to his future...or risk losing the second chance he desperately needs.

In Can’t Let Go, we have two characters we met in the previous book, Can’t Hardly Breathe. Ryanne is one of Dorothea’s best friends while Jude is one of Daniel’s buddies and business partner in their security firm. Jude has a pretty bad attitude, justified after all he’s been through, but he takes it out on Ryanne and her bar while fighting the attraction he has for her. He doesn’t want to be attracted, especially to someone who is serving drinks. Even responsibly, she is still a bar owner.

Jude’s mind makes him do things that I was a little confused about. He takes his determination not to feel again to extreme measures. Especially when he feels his wall against Ryanne cracking. He is really and truly messed up emotionally. Ryanne is a fun character. Her feelings are pretty much out there for the world to see and her determination to save her bar is admirable. She can be down, but she’ll bounce right back with creative ideas on how to fix the troubles that befall the bar. Mud and oil wrestling? Foam parties? Between Ryanne and Selma, they come up with some fun ways to prove they are here to stay.

I have to admit, that even though Jude causes a lot of his own problems, I really felt for him. He has some pretty hard breakdowns in his journey to Ryanne and they are heartbreaking. That just made the changes in him, and the happiness he gains so very special. Of the three, (Brock, Daniel & Jude) I think Jude is my favorite. His problems just seem so much more intense. I love the side of him that Ryanne brings out, and the man she is with at the end is so much different than at the beginning of the story. He actually learns innuendo, which Ryanne is queen of to my great amusement.

It may sound corny, but I LOVE the way Gena references her other books here. Video games and cat names after her other series and mentioning other authors and their books. It is fun to see that carryover.

Overall, Can’t Let Go was a fun, romantic read with some great characters. I have always loved Gena’s characters, which is what brought me over to her contemporary. I was not disappointed and loved them all. Can’t Get Enough (coming out Dec. 5th) is going to have to really bring it to top my love for Jude and Ryanne!