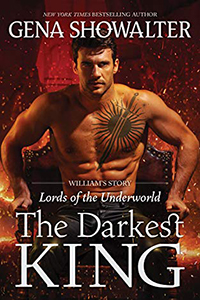 A merciless prince feared by all…

Cursed by a vengeful witch, William of the Dark will die if he ever falls in love—murdered by the woman who steals his heart. His lone shot at redemption is a book filled with indecipherable code. Break the code, break the curse. Now, centuries later, he’s condemned to a string of one-night stands…until he finds the only woman in the worlds able to set him free.

A rare creature of myth and power…

One of the last living unicorn shifters, Sunday “Sunny” Lane works from the shadows as a cryptanalyst, on the run from assassins and poachers. Then the darkly seductive William abducts her, holding her captive in Hell. The closer they get, the more she hungers for his touch…and the stronger a mystical desire to kill him becomes…

At war with his brother, Lucifer, and determined to become a king of the underworld at long last, William must resist the irreverent beauty who threatens his future. But every day Sunny tempts him more, his hunger for her unmatched. Will he risk his heart—and his life—or will the curse ensure his end?

I have been waiting for William’s story for a long time. I thought we were finally going to have it with Gillian, so I was a bit disappointed when it turned out they were not a couple. I have to admit though. I really love Puck for Gillian, but I felt kind of sad for William which made me want his book even more.

Now, unicorn shapeshifters with filters. Not what I was expecting. I thought it was kind of strange to throw in such a random type of character this far into the series. That may be a little bit of why she is not one of my favorite female characters of the series. On the other hand, we can’t have “normal” for William. He needs to have something spectacular and different.

What really captivated me about the book was learning William’s past as well as just what a special type of being he was. There was so much to William and to see it all broken down was so interesting. It wasn’t just a love story. I felt like Gena Showalter gave her readers answers to so many William questions. The curse that we have heard so much about was a bit of a disappointment, and the lack of strength to that curse made the romance between William and Sunny kind of take a backseat to all the other information we were being given. I’m still trying to grasp a rainbow unicorn shifter with the Prince of Hell. Not a deal breaker though.

I’m kind of scared after reading the ending. Is this the last we will get from the Lords? I haven’t done enough research to know for sure, but I’ve got fingers crossed that we have more to come. Like Pandora and Hades. I think they need books too. I just don’t want to leave this world of kick ass females and hilarious characters.