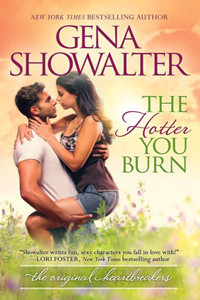 The Hotter You Burn by Gena Showalter
Series: The Original Heartbreakers #2
Published by HQN on July 28, 2015
Genres: Contemporary Romance
Pages: 384

Beck Ockley is ruthless in the boardroom...and the bedroom. He's never been with the same woman twice, and vows he never will. With a past as twisted as his, meaningless sex keeps the demons at bay. His motto: One and done. No harm, no foul.

Harlow Glass is the most hated girl in town. The beautiful artist is penniless, jobless and homeless. When she sneaks into Beck's home—her ancestral estate—for food, she's shocked by his early return...and her immediate, sizzling and intense attraction to him.

For the first time in Beck's life, he can't get a woman out of his mind. All too soon, friendship blooms into obsession and he'll have to break her heart...or surrender his own

I can’t resist the interactions Gena Showalter writes between her characters. Sure, this is a contemporary romance where you are going to get that angst and frustration. But sometimes, you put these characters together and you can’t help but to laugh out loud at their wit and sassiness. It is after The Hotter You Burn, I believe this fun, quippy back and forth between characters is just a given in Gena’s characters. This is why I will continue to read whatever she writes, it is just too much fun not to.

I get frustrated easy. Beck & Harlow frustrated me. They get so very, very close to just being the couple they are meant to be, just to have one of them open their mouths and ruin everything. These two just don’t know the meaning of the word “communication”. They are both so touchy that even little comments totally destroy every little bit of peace they may have constructed. I nearly went insane with the exasperation of them. It was very convenient for them to have a mediator.

Once again, I loved the side characters! These residents of Strawberry Valley come up with the most outrageous ideas. The silly texts, the crazy, wild ideas of Jessie Kay, and the togetherness of their group was the icing on the cake of this story.

Harlow came a long way during her life in Strawberry Valley, and the resentment of the residents was expected. They put her through a lot in this book, but I didn’t see it coming to the climax that it did. I couldn’t imagine adults pulling the stunt they did. I think because I was so wrapped up in the relationship of Beck & Harlow that I didn’t take the resentment of the community as serious as I should have. Then it slaps you in the face so close to the end that you kind of feel like it was an after thought. Despite feeling that drama was just slid in there, it did cause some pretty serious panic from both sides and that panic ran off the pages and into me.

Normally I am not a contemporary romance reader, as I’ve said before. I’m not really a fan of the romance being the sole focus. But, The Hotter You Burn made me laugh, it made me all panicky and afraid for the couple despite being totally disgusted with them sometimes. The side characters made for some great, fun experiences. I admit there were a few times I thought the couple had finally overcome the problems and a little groan when I saw there was still a lot left to the book. I couldn’t figure out what the hell could happen to them next!

I really enjoyed The Hotter You Burn, and I’m sure other contemporary romance readers will have fun with the romance and dynamics of the town. This was a lot of fun and I really can’t wait until The Harder You Fall! The setup for this couple is hot and is going to be make for quite the story.

Waiting On Wednesday ~ The Harder You Fall by Gena Showalter