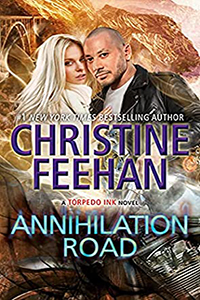 Savin “Savage” Pajari is convinced he’s not worth a damn thing. He’s not like his brothers. He’s a sadistic monster, a killer—a man no woman could truly love. So it completely throws him when a stranger risks her life for his, pushing him out of the way and taking the hit that would have sent him six feet under. If he had any kind of sense, he’d leave her alone, but Savage can’t get the woman with a smart mouth and no sense of self-preservation out of his head. With one kiss, he’s lost.

Seychelle Dubois has spent her entire life not feeling much of anything, until Savage comes along and sets her whole body on fire. Kissing him was a mistake. Letting him get close would be a catastrophe. He’s the most beautiful—and damaged—man she’s ever met. He has a way of getting under her skin, and what he’s offering is too tempting to resist.

Seychelle knows so little about Savage or the dangerous world of Torpedo Ink, but his darkness draws her like a moth to a flame. Loving him could mean losing herself completely to his needs—needs she doesn’t understand but is eager to learn. But what Savage teaches her could destroy her.

All the guys of Torpedo Ink have something special they do. I don’t know if Savage’s was mentioned before, but we find out in Annihilation Road and his fierceness is completely understandable. All the members issues are understandable, but with Savage his special gift also enhances his anger. He is a powder keg and his brothers and sisters have been getting increasingly worried about him.

Then Seychelle risks her life to save his. The minute he opens his eyes and sees Seychelle is the minute he falls down a road untraveled and steep. It was so much fun to watch the things Savage would do for Seychelle and her friends that were so awkward for him! His bad ass rep just might be on the line!

Seychelle seems to be a quiet, reserved person. But deep down there is a part of her that has been yearning for what Savage has to offer. Even if he thinks there is no way she will ever love that side of him. They are both surprised, and Seychelle is still even uncomfortable with what she is finding out about herself.

Seychelle possesses a certain gift that puts her in danger both from crazy stalkers as well as health-wise. She knows what happens, but she tries to control things herself. This is not good enough for Savage, especially with the stalker problems. Thankfully, Savage and Torpedo Ink are there to help her. She’s very unsure about the club and doesn’t really want to be involved, but at the same time they are incredibly helpful to her.

I absolutely loved the different sides of Savage we see in Annihilation Road. I went into this book not really looking much stuff up about it on social media, etc., so when I hit the ending I was left with a “what the hell” kind of moment. I could see it being an ending, but really it wasn’t. I thought I was going to burst with frustration until I got online and found out Savage Road was a book two of Savage and Seychelle’s story. Well, that was a big relief. Their story is emotionally rough, but that is to be expected creating a relationship for someone like Savage. I loved every minute of it and you can bet Savage Road will be read as soon as available which is coming up, January 25th, 2022.