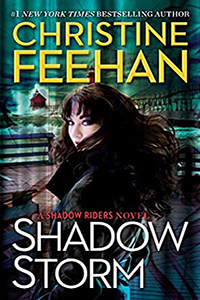 As the youngest member of the Ferraro family, Emmanuelle has watched each of her brothers find happiness in love while her own heart was shattered by a lover’s betrayal. For two years she’s stayed as far away from Valentino Saldi as possible—until she learns that he’s been shot during a hostile takeover of his family’s territory.

Emme’s first instinct is to call her brother Stefano for help, and soon the entire Ferraro clan arrives to bring Val back from the brink of death and protect the Saldis from further attack. With one choice Emme has re-exposed herself to Val’s intoxicating pull and dragged her family into the Saldis’ private war.

A deadly storm is brewing, and only time will tell who survives…

It is Emme’s story! I’ve waited so long. She has struggled so hard with her attraction to Valentino Saldi. He was a total ass and didn’t deserve her at all. She was even preparing for a Shadow Rider arranged marriage!

However, after Val is almost killed, the truth of the betrayal Emme believes he did is unraveled. It also gets the whole Ferraro family involved in the Saldi family issues. When you think of mob families like the Saldi’s you assume they are the worst criminals. However, Val discovers that part of his family is involved in business even he wouldn’t be involved in. With the help of the Ferraro’s, Val starts taking control of the family and works to get them out of a business that he can’t abide by.

I loved both the intense action scenes as well as the love story that is Val & Emme. The two make a perfect pair and I love them so much. Val’s admissions are so heartfelt and had me melting for him. It is going to be hard bringing the Ferraro and Saldi families together, but no one wants to hurt Emme so they will find a way to make it work. I thought Emmanuelle’s brothers would be harder on Val. I mean they did give him a hard time, but they put that aside to help Val. I’m going to be really interested to see how these families coexist without conflict going forward.