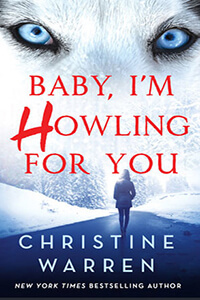 WELCOME TO ALPHAVILLE, where the she-wolves and alpha-males play. . .for keeps.

Renny Landry is a wolf on the run. Pursued by a shapeshifting stalker and his slobbering pack of killer coyotes, she is forced to flee her job as a librarian to find sanctuary in the wooded hills of Alpha, Washington. A well-secluded safe space for troubled shifters, Alpha is Renny’s last hope. But the first person she meets there is a gorgeous alpha male with fiery eyes, fierce tattoos, and one ferocious appetite—for her…

Mick Fischer thought he left his past behind when he moved to Alpha. But fate has a way of biting him in the tail when a female wolf shows up on his property. Wounded, desperate—and disarmingly hot—Renny brings out the snarling, protective alpha beast in Mick like no other woman he’s known. Can these two haunted, hunted wolves manage to mate for life…even as the deadliest past demons howl at their heels?

After reading Something to Howl about, which is the opening novella to the Alphaville series, I’m really excited to dig in and meet the rest of the town. I liked Christine Warren’s writing from the novella and the attitude she was able to portray in the characters so I’m sure this town is going to be full of some fun and interesting shifters.

Baby, I’m Howling For You releases January 30, 2018. Gives you time to jump into that novella (reviewed yesterday) and be ready for a howling good time! Did I really just type that? Make sure to grab this one, I can’t wait to hear what you think! 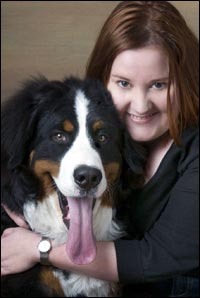 Born and raised in coastal New England, Christine Warren lived in the South and the Mid-Atlantic before hopping to the other side of the country to take up the life of a transplant in the Pacific Northwest. She completely bypassed those states in the middle due to her landlocking phobia. Hmm, need to research a scientific term for that...

When not scrambling frantically to complete her latest writing project, Christine spends most of her time as a crazy animal lady, hanging out with her dog Levi (he’s the one with the hair) and pretending to train him to have some manners. She also hangs out with her horse, Cal—a thoroughbred with a craving for strawberry licorice twists—her goddog, Merlin; and her best friend, fellow author Hannah Murray. In addition to playing with her pets, Christine’s hobbies include identifying dog breeds from photos of their underbellies, appreciating fine and not-so-fine wines, shopping for the perfect pair of Christian Louboutin shoes, and most of all reading things someone else had to agonize over.

She enjoys hearing from readers and can be reached via email sent to Christine@christinewarren.net or by postal mail to Christine Warren, PO Box 871900, Vancouver, WA 98687-1900.