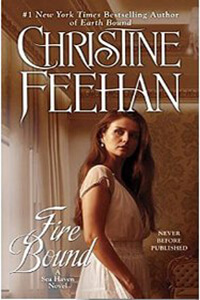 Flame-haired Lissa Piner is a skilled glass blower whose delicate gift conceals a burning inner strength that can destroy as exquisitely as it can create. Commissioned to design chandeliers for a string of luxury hotels, her remarkable skills have taken her to Italy. But Lissa’s real mission there is a secret. For her entire life has been a lie, leading to a chance to avenge a terrible wrong.

Enlisted as her bodyguard is Casmir Prakenskii, a trained assassin living off the grid. In Lissa, he sees a kindred spirit—something unexpected and wicked, mysterious and sensual. But more than desire is about to bring them together: because both of their pasts cry out for revenge. And for two people with this many secrets, this much passion, and this many enemies, someone is bound to get burned.

I admit I haven’t read books 1-3 of this series. I enjoyed Earthbound which was why I picked up Fire Bound. I have to say, fire is so much hotter than earth!

Fire Bound takes us out of Sea Haven and into Europe where we see the person Lissa has been hiding. Of course the Sea Haven Prakenskii’s are not going to let her go off without some kind of escort and we get to meet yet another brother.

Lissa and Casamir are so much alike. They both have spent their lives pretending to be other people. Doing jobs that no one else can handle, and becoming new people all the time. Also, being of the same element, it’s not a wonder the two are meant to be together. It is not long before Lissa realizes just who Casamir is. The two are like magnets and pulled together. Lissa thought she was going to be one of the sisters not to be taken by a Prakenskii. So wrong. Those boys seem to come out of no where all the time. We even get to meet another one in this story which is a complete surprise and what he has to say is some great foreshadowing.

Lissa arrives in Italy with her initial objectives that she performs every year for her uncle Luigi. However, Casamir discovers parts of Lissa’s life that takes everything she’s known and turns it upside down. The two end up dealing with a lot more than just the quick job Lissa started with. That whole mob part of the story was so intense. The actions of the characters were so cruel, and sometimes just obscene. The descriptions were very detailed and would make you cringe. I experienced great satisfaction at the final job in Italy.

You would think that would make for the end of the book, but Lissa and Casamir are both determined to take out the threat to the Prakenskii family. They both had plans to take care of this threat, so it was only natural the two come together with their plan. This was a quick but emotional section of the story. They both went in knowing the risks, but they were determined to take care of these people for good.

Ok, now, I found the sex and relationship so much hotter than in Earth Bound. Lissa and Casamir are definitely fire elements and it shows in their relationship. It is hot. Casamir has been trained in the art of sexual acts and Lissa is more than willing to let him show her what he knows.

Overall I found Fire Bound exciting and thrilling. The whole story just pulled you into a story of political intrigue and love all in one. I have a slight complaint with the names. They alternated calling each other by their alter egos and real names. Lissa more so than Casamir. Lissa went into calling him by his real name fairly quickly, but I think Casamir called Lissa everything. From her few names to all the little endearments. It did get a bit confusing at times. There could have been a tone I was missed that would cause him to call her different names at different times.

Ok, I don’t see another book on Goodreads. There has to be a follow up with this. I have to know what happens to Vicktor. I’ll be keeping my eyes open!