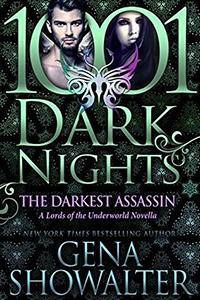 Fox is a demon-possessed immortal with many talents.
Ability to open portals—check
Power to kill the most dangerous Sent Ones—check
Scare away any man who might want to date her—mate
Now, the keeper of Distrust has been marked for death, a winged assassin with rainbow-colored eyes tracking her every move, determined to avenge the males she accidentally decimated. If only she could control the desire to rip off his clothes…

Bjorn is a fierce warrior with many complications.
Tragic, torture-filled past—check
A wife he was forced to wed, who is draining his life force—check
Ever-intensifying desire for the enigmatic Fox—mate
Never has he hesitated to exterminate an evil being. Until now. The sharp-tongued female with a shockingly vulnerable heart tempts him in ways no one else ever has, threatening his iron control.

But, as Fate itself seems to conspire against the unlikely pair, both old and new enemies emerge. And Fox and Bjorn must fight to survive.

And learn to love…

One of my favorite things about Gena Showalter’s books is her female characters and Fox is no exception. She’s fiesty, smart-mouthed and kick-ass! I loved her from the start. The fact that Fox does something directed by her demon is a sign that she hasn’t gotten good control of it yet. It also means that she is going to regret some of her actions. The Distrust demon takes over and causes Fox to do something that puts her on the kill list for the Sent Ones. She knows it as soon as she comes to her senses. Fox prepares herself for being attacked. She doesn’t have long to wait! Bjorn shows up at the most inopportune time. But you can’t catch this fox unprepared! 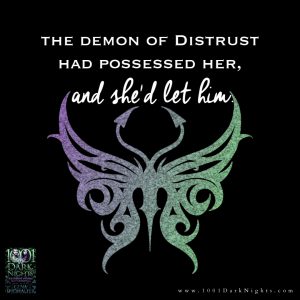 Bjorn has not had an easy life, but now he has his boys and a great gig being a Sent One. His situation makes you feel for him, and when he experiences the little happy times with Fox, it just made my heart swell. I really felt he deserved that time. His relationship with Thane and Xerxes is so great and I’m thankful he has that kind of support, it is just sad that he’s been celibate for so long. His time with Fox felt like an awakening for him. I really enjoyed seeing the changes that happened for him. 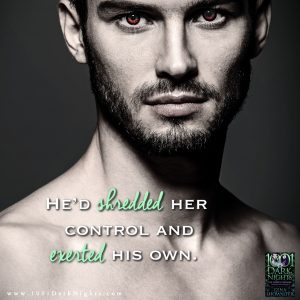 The Darkest Assassin was a fun, quick love story with characters that go through a fair amount of growth. We get a glimpse of William and his potential mate, which made me even more excited for The Darkest King. There is not a lot of movement in the war. But I’m sure we’ll see more of it in the full sized novels. We were hyper focused on our couple and I loved every minute. The Darkest Assassin is also a great explanation of the Sent Ones becoming involved in the war and how they all end up in hell. Great little tidbits in here, with a big heart-warming love story. Definitely all the characteristics of a fun Gena Showalter book! 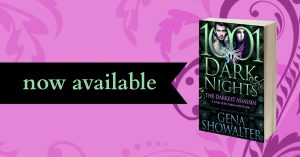 
“I love this world…this is Gena Showalter at her best!”—J.R. Ward, #1 New York Times bestselling author