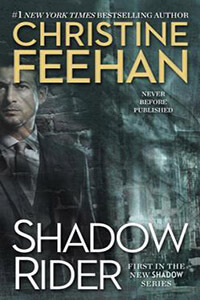 Whether it’s fast cars or fast women, Stefano Ferraro gets what he wants. When he’s not fodder for the paparazzi, he commands Ferraro family businesses—both legitimate and illegitimate.

While their criminal activity is simply a rumor yet to be proven, no one knows the real truth. The Ferraros are a family of shadow riders capable of manipulating light and dark, an ability Stefano thought ran in his family alone—until now…

With little left to her name, Francesca Cappello has come to Chicago in hopes of a new life. She wasn’t expecting to attract the attention of a man with primal hunger in his eyes, driven to claim her as his to protect and to please. And if he discovers her secret, it could ruin her...

I have really been enjoying the Sisters of the Heart series so I was on board to start this new series with Christine Feehan.

Stefano is the head of this Chicago family that protects the neighborhood as well as any outside conflicts that come to them for help. No one knows for sure just what they do or how they do it, but after a rigorous investigation of the facts of a case, problems suddenly disappear.

The Ferraro family are Shadow Riders. This was a paranormal skill that I’ve not read about much. The family can ride in the shadows as if they were encased in tubes. They take advantage of their skill to complete the tasks required to protect those who need their help. To keep their tasks secret, they use a lot of tricks with the paparazzi to establish alibis.

Francesca is new to the neighborhood, looking to hide from a dangerous past with an old friend. Stefano, who looks after the neighborhood and knows everyone, must investigate. What he finds when he sees here totally blows him away. This woman could be the hope his family needs. However, Francesca cannot have any attention brought to her. She doesn’t want to put her new friends in danger but Stefano is very persistent in his pursuit of her. Trying to assure her that he can protect her from anything, including those that are searching for her. It is really hard for Francesca to trust. She doesn’t want to involve anyone into the mess of a life she is running from. Including this man who is just determined to have her. She is stubborn and tries to avoid Stefano’s advances. One because she doesn’t believe she could ever live in his life, and two, because she wants to protect him.

When classifying this book, I did not know whether to say it was a paranormal romance or maybe a romantic suspense. Most of the book dealt with the courtship of Stefano and Francesca. Stefano needs to have Francesca commit completely to their relationship before he can reveal any of what they do. She already has suspicions that they are mafia. So a lot of what the book covered was Stefano doing what he can to get Francesca to connect with him. He wants a relationship of love, unlike his parents, so the next generation will not know the pain and suffering the shadow riding training his family endured. Finding a female shadow rider is rare, and Stefano and Francesca’s relationship also gives the rest of the Farraro family hope. I don’t know if I could have handled Stefano’s overbearing, protectiveness. I really was surprised that Francesca put up with it. She was so independent through the beginning of the book, I was surprised she seemed to fall pretty quickly into Stefano’s obsessive nature. Occasionally she rebelled, but she couldn’t resist Stefano for long.

The shadow riding jobs were few because the abilities the riding gave them, made execution swift. Finally about 3/4’s of the way through the book, maybe longer, they finally get a big job that we can focus on. They risk a lot on this job and could possibly put the whole family in danger. This job ends up being special and possibly a lead in to the next book. The conclusion of one of the main conflicts uses the shadow riding as a game against their foe and I loved it. There could have been more drama at the end of it, but I still really enjoyed it.

Despite what I felt was a lack of paranormal, I still really enjoyed the romance in this book. We did see a couple of good action scenes which always keeps me engrossed. I also kept waiting to see if something Stefano did was going to be the last straw for Francesca. There is definitely a good amount of descriptive sex. I felt like this book had a little bit of everything all rolled in and I had a good time in this world. It would be nice to see more focus on the shadow riding, but I’m sure we can get more into it as we continue on in the series. This book mainly just established the world and the start of what could be a very engrossing series. I have a feeling of who the next couple will be, and I’m kind of on the fence about how I feel. I hope Ms. Feehan can pull it off nicely for me.

Shadow Rider is definitely a great book to check out and hop into the world of the shadow riders!