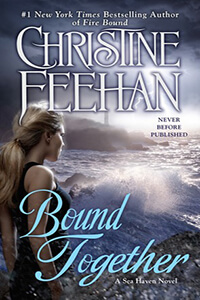 The Sea Haven series comes to a climactic end as the mysterious man from Blythe Daniels’ past re-enters her life. Don’t miss the final Sea Haven novel from the #1 New York Times bestselling “queen of paranormal romance” (J. R. Ward).

For five years, Viktor Prakenskii has put his life on hold in order to take down the world’s most feared motorcycle club from the inside. But carrying out the insane violence and seeing the club’s exploitation of the innocent has brought his traumatic past roaring back. And there’s only one cure: to see the wife he left behind...

Blythe Daniels thought she’d never see Viktor again after he murdered her stepfather and left without a word. She rebuilt her life without him, becoming a personal trainer and physical therapist...becoming strong enough for others to lean on. But when Viktor comes back to Sea Haven, he’ll make Blythe question everything she thought she knew about good and evil—and the dark desires of the heart...

Bound Together is the final book in the Sea Haven series by Christine Feehan and features Blythe and Viktor. For some reason when I thought of Blythe I thought of someone more mature. No, that’s not the right word, older? I’m not sure how to put it. But now that I think about it, that almost motherly personality is exactly what Viktor is counting on right from the beginning.

Viktor Prakenskii has been undercover for five years. He has put his whole life on hold for this one job. His sacrifice, and it is a sacrifice for him, he’s not a work-a-holic, puts him into a position to stop one of the worst kind of predators out there. The descriptions of what Viktor and his group go through, as well as what they face on the job is pretty raw. Throughout Bound Together we are constantly brought back to just what all the players have suffered. The abuse that Viktor and Torpedo Ink go through and witness… boy, it was heartbreaking. It has however turned them all into people who do not know how to live in normal society. Viktor is holding a huge burden over Blythe with the hopes that she will help him and the club assimilate back into the world. But he has been gone for five years and has no idea what kind of reception he is going to get from his wife, let alone whether she will be willing to help them. Viktor is the big, bad violent man, but he is also still the boy that was put in that school. To me, he seemed really young, or immature? I don’t know how to put it into words. You’re probably thinking I’m crazy. That he was one big bad ass man. Well, yes, he was that. I think it may have been his hero worship of Blythe and all that he imagined she was going to do for them that made me feel that way.

Blythe didn’t really think she was married, but had not gotten over Viktor in all those five years. When he returns and thinks that he is just going to jump into married life, well, let’s just say she is not quite on board. However, there were a lot of circumstances that explained all the miscommunication. The problem is there is a HUGE event that happened after Viktor left and getting over that for the both of them is going to be hard. Her suffering really comes through, as does Viktor’s when he learns of the truth.

I really wish I had of read the Drake sisters series now. They played a big part in the showdown with the enemy in Bound Together and I would have liked to know more about their stories. Especially when I found out they are related to Blythe and the role they played (or didn’t play) in Blythe’s growing up. The fight between the Sea Haven group against the Swords seemed overwhelming at first, and I have to say, I was really impressed with the finality of the fight. Things moved swiftly and you have to really keep track of where everyone is.

Bound Together could be a really hard book to read. There are seriously depraved situations being addressed and reading them can really turn a stomach. It really brings home that things like this happen in the world. It can really sicken a person. The love that comes through and how everyone comes together at the end gives hope for everyone and that brought a smile to my face.

Bound Together took me through a lot of emotions that made me feel for Blythe and Viktor. I did feel like all of the aspects of the book, killing Ethan, Blythe and Viktor’s relationship, and establishing the characters of Viktor’s crew were nicely balanced. We went for an emotional ride, but I left the book feeling satisfied and with swell in my heart.