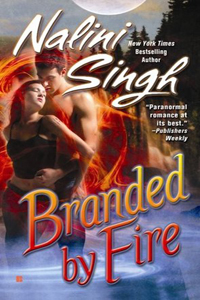 When a brilliant changeling researcher is kidnapped, DarkRiver sentinel Mercy, a cat, and SnowDancer lieutenant Riley, a wolf, must work together to track the young man-before his shadowy captors decide he's no longer useful. Along the way, the two dominants may find that submitting to one another uncovers not just a deadly conspiracy, but a passion so raw that it'll leave them both branded by fire.

Mercy is a very dominant DarkRiver Sentinel. With her position, it’s going to be pretty damned hard to find someone more dominant, or even as dominant as her to be her mate. That is an issue that has been weighing heavily on her mind. Where will she find another cat that can tolerate her dominance?

Mercy gives into her need for contact with high ranking Lieutenant Riley from the SnowDancer pack. He’s pretty dominant, but there’s one big glaring problem. He’s a wolf. They may be from allied packs, but they are high ranking members of those packs, blood-bonded to their alphas. No one seems to know what will happen if the two are actually mated. The fear is that one of them will lose their position or even have to leave completely their animal’s packs. Mercy’s grandmother thinks she has the solution, she sends a couple of Sentinels from South America for Mercy to meet. Hoping that one of them will win Mercy over. Riley just can’t let that happen though.

The storyline of the Human Alliance seems to be just added in to keep the action and complications the packs face moving forward. Most of the stories have focused on the Changelings or the Psy, so having the humans thrown in this way was a little strange. Their intent confused me. Thrown in was the random mind controlled violence by the Psy, I was left with unsolved issues and questions.

The relationship between Mercy and Riley was really the focal point I think. The Human Alliance and Psy issues just built in to create points to bring the two together. The suspense of what a mating between these two created some really good tension for me. When things ramped up and life changing decisions needed to be made quickly, I couldn’t turn the pages fast enough. I was holding my breath with tears running down my face.

This definitely would have ranked higher if the action had of made more sense to me. The romance definitely made the book!