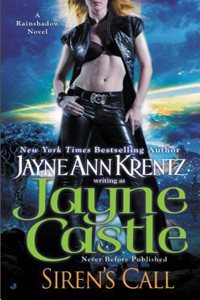 In the mysterious world of Harmony, there are places filled with unexplored marvels. But Rainshadow Island isn’t about to give up its secrets…

In the alien catacombs of Rainshadow, there are creatures whose compelling songs lure the unwary to their death. That’s why Rafe Coppersmith, hired to clear out the catacombs for exploration, needs a music talent. He’s knows the perfect one, but she probably doesn’t want anything do with him...

Ella Morgan had once fallen hard and fast for Rafe, but then he disappeared for months…and he’s not about to tell her why. Ella, too, has secrets that only her dust bunny knows. She’s not just a music talent, she’s a Siren: a paranormal singer capable of singing men to sleep—or to their deaths.

But once on Rainshadow, Rafe and Ella will learn that surrendering to passion doesn’t come without risks—and fighting fire with fire only adds to the flame…

I was wary going into Siren’s Call as it was book 4 of a series and I am always scared jumping in out of line like that. I was pleasantly surprised that this worked so well as a standalone. I would have never known it was book 4.

Ella is trying to hide her true nature, but sometimes a girl just has to take care of business when confronted with total idiots. It is very dangerous for anyone to know she’s really a Siren. Ella also avoids romantic relationships because she knows as soon as the guy finds out what she is, they’ll be gone in a heartbeat. It’s not worth the effort.

Ella is trying to start her own private detective agency and her first case involves some trapped dust bunnies. Yes, I said dust bunnies. I was not entirely sure how I felt about dust bunnies actually being characters. It was definitely imaginative. It the midst of the rescue, her nature is exposed to a few and she meets this really great guy who does not seem to be afraid of her at all. In fact, he even throws out the offer of a coffee date. Unfortunately, this wonderful coffee date never happens. Maybe he was afraid of her after all.

A few months down the road, mystery man reappears in her life. He is coming across as a little sketchy, and instead of wanting that coffee date, he actually wants to hire her. Ella is a bit perturbed and I was too. Just appearing out of the blue like that with no explanation as to where he was? Yeah, jerk move.

Once Ella and Rafe do team up, the action picks up quite quickly and they find themselves being attacked before they even set off for the true investigation. The creepy island they are to work on, we find some even crazier creatures than dust bunnies. I’m still shaking my head on dust bunnies. The mystery unravels as the romance builds. I like that Rafe’s true reason for not following up on their date was legitimate. Once his problem is revealed, they also have to work to save him.

Siren’s Call really impressed me. Being a book about Siren’s, which I don’t think I’ve ever read, plus not reading the beginning of the series, I was worried that I would not be able to get into the story. Instead, I was excited about the adventure Ella & Rafe were on and their romance had a nice build to it. The two had several odds against them, both personally and professionally, but were able to overcome them. Even with a dust bunny with a love for wedding veils! I will definitely be investigating the other books in the series to add to my TBR. 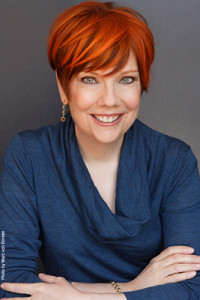 The author of over 40 consecutive New York Times bestsellers, JAYNE ANN KRENTZ writes romantic-suspense, often with a psychic and paranormal twist, in three different worlds: Contemporary (as Jayne Ann Krentz), historical (as Amanda Quick) and futuristic (as Jayne Castle). There are over 30 million copies of her books in print.

She earned a B.A. in History from the University of California at Santa Cruz and went on to obtain a Masters degree in Library Science from San Jose State University in California. Before she began writing full time she worked as a librarian in both academic and corporate libraries.

Ms. Krentz is married and lives with her husband, Frank, in Seattle, Washington.