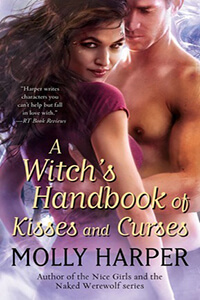 Nola Leary would have been content to stay in Kilcairy, Ireland, healing villagers at her family’s clinic with a mix of magic and modern medicine. But a series of ill-timed omens and a deathbed promise to her grandmother have sent her on a quest to Half-Moon Hollow, Kentucky, to secure her family’s magical potency for the next generation. Her supernatural task? To unearth four artifacts hidden by her grandfather before a rival magical family beats her to it.

Complication One: Her grandfather was Mr. Wainwright and the artifacts are lost somewhere in what is now Jane Jameson's book shop.

Complication Two: her new neighbor, Jed Trudeau, who keeps turning up half naked at the strangest times, a distraction Nola doesn't need. And teaming up with a real-life Adonis is as dangerous as it sounds, especially when he’s got the face of an angel and the abs of a washboard—can Nola complete her mission before falling completely under his spell?

In A Witch’s Handbook of Kisses and Curses we have a new character brought to us from across the pond! Nola has been sent to Half-Moon Hollow by her family to find 4 sacred objects that are needed to keep a curse in place. Unfortunately, Mr. Wainwright was her grandfather and the protector of the artifacts. As we have seen in the Jane Jameson series, he wasn’t the most organized man. Now that Mr. Wainwright has passed, Jane has completely renovated the shop and who knows where these objects are now. To keep the other family who want to see the curse broken from finding the objects, Nola has to act fast.

I always enjoy the mysteries we find in this series, as well as the characters. Each new character is unique and has a characteristic that makes them stand out and love them. A Witch’s Handbook of Kisses and Curses brings us into the supernatural power of magic like we haven’t seen yet. It gives you a different focus instead of focusing on the vampires. Even more interesting is we are introduced to another supernatural being as well.

During the investigation, Nola becomes part of the Half-Moon Hollow group. She settles in, connects with Jane and the group and even gets herself a little work. For those that have been through the Jane Jameson series, and followed along with this one, there will be a big family surprise! The way a certain character behaved had me in stitches.

At first I thought Jed was going to just be this hunky neighbor guy who helps Nola out in her adventure. He pulled some surprises on me. He definitely wasn’t the person I thought he was. It kind of put me off him for awhile. I think he has been the character I got most angry at in the series, but does come around to redeem himself. I think he will be spending a lot of time making up for his part in the scheme of things!

I wouldn’t say this was my favorite Half-Moon Hollow book, but it still made me laugh and kept me interested. The narration as usual was great and made my experience with this book even better.