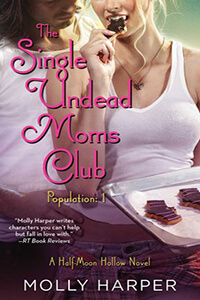 Widow Libby Stratton arranged to be turned into a vampire after she was diagnosed with late-stage cancer. It wasn’t the best idea she’s ever had, but she was desperate—she’s not about to leave her seven-year-old son to be raised by her rigid, overbearing in-laws.

On top of post-turning transition issues, like being ignored at PTA meetings and other mothers rejecting her son’s invitations for sleepovers, Libby must deal with her father-in-law’s attempts to declare her an unfit mother, her growing feelings for Wade—a tattooed redneck single dad she met while hiding in a closet at Back to School Night—and the return of her sire, who hasn’t stopped thinking about brave, snarky Libby since he turned her.

With the help of her new vampire circle, Libby negotiates this unfamiliar quagmire of legal troubles, parental duties, relationships, and, as always in Harper’s distinct, comedic novels, “characters you can’t help but fall in love with” (RT Book Reviews).

If there would be any reason for me to want to turn into a vampire, I think Libby’s reason would be it. Those in-laws of hers, despite their genuine caring for their grandson, just came off as overbearing as you could get. Nope, I would want to avoid that too. However, in focusing on the one reason, she failed to take into consideration all the other responsibilities a vampire mom would have to fulfill. It doesn’t help that the whole PTA is terrified of her.

Jane and Dick do find out about her turning and show up to try and help by teaching her the rules of being a vampire. Those rules however do not help Libby make cupcakes when the smell makes her gag. Libby goes from one problem after another with the school, and then the big bomb drops.

Libby does find solice in the single dad she runs across at the school who is so much more accepting, and is there to help her deal with the problems being a vampire has created.

The Single Undead Moms Club just keeps throwing curve balls at Libby. So many revelations and obstacles. Every time you think you are working through one problem, up pops a big surprise. Wade, Jane and Dick seem to be her only supporters and they pull a fun little surprise with the gang. then her maker shows up to complicate things even more. I mean complicate things. Poor Libby just isn’t going to get a break whatsoever. I really loved the scene where the whole Half Moon Hollow gang gets together for Libby. I was missing them in this story. Jane and Dick’s new position kind of leaves me a little blah. I hope that that improves over the next books. Taking over Olivia’s position has put a lot of stress on them and I think the responsibility has changed them.

By the end of this story, you are so baffled on how each story line is going to work out. It was definitely a hard to put down book with all the complications, I just found it hard not having Libby as connected to the rest of the gang. I hope to see her more involved in the following stories.