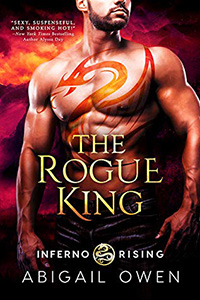 Kasia Amon is a master at hiding. Who—and what—she is makes her a mark for the entire supernatural world. Especially dragon shifters. To them, she’s treasure to be taken and claimed. A golden ticket to their highest throne. But she can’t stop bursting into flames, and there’s a sexy dragon shifter in town hunting for her...

As a rogue dragon, Brand Astarot has spent his life in the dark, shunned by his own kind, concealing his true identity. Only his dangerous reputation ensures his survival. Delivering a phoenix to the feared Blood King will bring him one step closer to the revenge he's waited centuries to take. No way is he letting the feisty beauty get away.

But when Kasia sparks a white-hot need in him that’s impossible to ignore, Brand begins to form a new plan: claim her for himself…and take back his birthright.

The Rogue King is book one in the Inferno Rising series by Abigail Owens. I was so excited! We were treated to dragon shifters! Probably one of my favorite types of shifters.

We get a brief overview of the world and the phoenix characters at the beginning so we kind of have a starting point. Phoenixes are rare and as far as we know, Kasia and her sisters are the only ones left alive. Since acquiring their powers and being teleported to different safe places over a year ago, Kasia has been trying to deal with everything on her own. When the side effects of her powers get to be too much, she seeks help with paranormal medical staff, only to be betrayed.

News gets out that there is a phoenix and the search is on by dragon clans to get to her first. Brand, a rogue dragon shifter working for the king of the Blue Dragon Clan, finds Kasia first. She isn’t going to just get picked up easily though. She has some skills and she’s going to do her best to get away, just as her mother taught her.

I found I liked Kasia. She seemed to really grow throughout the book. In the beginning, she seems very unsure of herself and what she is doing in the world, but as her journey with Brand goes on, she gains confidence and strength. By the end of the book, I felt like Kasia was a different person. She had definitely become worthy of being a queen of a dragon clan.

Brand and Kasia work hard at containing their relationship so that the initial plan Brand was sent out with is what is carried out. Kasia sees the wisdom in it when she reaches the Blue Clan and the two try their hardest to stick to it. Despite how miserable it makes them.

I was kind of disappointed in Kasia when she takes it into her head that Brand used her. It was very frustrating getting ready to go to war with the Gold clan in the middle of controversy between the two. The battle was intense and had me holding my breath for a bit. Kasia and Brand are true warriors and fight hard.

The ending was left with some mystery and animosity. I’m eager to find out more about our new character and the continuing storyline of Kasia’s mother’s killer. This world of dragons was fascinating and exciting. I’ll be watching for the sequel in the Inferno Rising series!

The only warning she got that she was being followed was the flick of a shadow in the headlights. Before she could react, a massive golden dragon slammed down on the road in front of her about half a mile out. She almost expected the ground to shake with the force, but the act was near silent.

She gritted her teeth and tightened her hands on the wheel. Rather than stop, Kasia hit the gas, pushing the car to go faster. He wasn’t taking her without a fight, that was for damn sure.

The dragon’s deep golden scales glittered in the oncoming headlights. He didn’t budge. But he did growl, his tail slashing back and forth.

“Move, you scaly bastard,” she muttered.

But she didn’t let up on the pedal.

He lowered his head and let loose a growl of warning, which she responded to by stomping harder on the gas.

She had no intention of playing chicken. If he didn’t, she’d ram this car down his fire-breathing throat. The hell with it. She didn’t want to go back to that cabin in Alaska anyway. Maul would miss her, but he’d be the only one.

Only the dragon didn’t move. Okay then. Kasia braced for impact.

At the moment she should’ve slammed into him, the beast heaved himself into the air, and she zoomed past, fishtailing underneath him from the force of the wind his wings caused.

He must’ve backed up, because he landed on the road in front of her again.

“You want another go, you oversized flying iguana?” she shouted, and bore down on him.

And again, he hopped out of her way only to land in her path.

Damn. Kasia held in a scream of fear-tinged frustration. They could keep this up all night, getting them nowhere fast. He wasn’t going to let her go.

With a growl of aggravation, though not defeat, Kasia stomped on the brakes. The tires squealed in protest, and the unpleasant odor of burning rubber followed her as she skidded the car to a stop broadside of the dragon, only a few feet away. If she rolled down her window, she could reach out and touch him.

The terrifying creature moved around the car, his movements more of a glide, like golden water flowing around her. He lowered his head to gaze in at her with an eye the size of her entire thigh. He snorted, and smoke trailed from his nostrils as he glared at her.

Please let this be Brand, and not some other phoenix-stealing dragon shifter.

Kasia glared back but raised her hands off the steering wheel in a gesture of surrender. 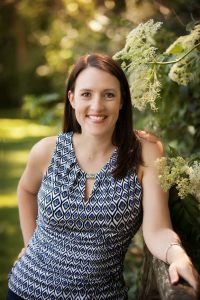