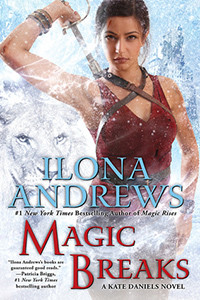 As the mate of the Beast Lord, Curran, former mercenary Kate Daniels has more responsibilities than it seems possible to juggle. Not only is she still struggling to keep her investigative business afloat, she must now deal with the affairs of the pack, including preparing her people for attack from Roland, a cruel ancient being with god-like powers. Since Kate’s connection to Roland has come out into the open, no one is safe—especially those closest to Kate.

As Roland’s long shadow looms ever nearer, Kate is called to attend the Conclave, a gathering of the leaders from the various supernatural factions in Atlanta. When one of the Masters of the Dead is found murdered there, apparently at the hands of a shapeshifter, Kate is given only twenty-four hours to hunt down the killer. And this time, if she fails, she’ll find herself embroiled in a war which could destroy everything she holds dear…

The action just keeps getting more intense with each installment. Hugh D’Ambry really pushes the limits on his fight with Kate and Curran. His actions continue to lead Kate to the fight she’s been preparing for her whole life. Fight she must! Curran is away, so the pack is relying on her to protect them. Kate and Curran are a power couple and when they are apart, things are noticeably harder. But Kate is strong and smart.

This book was an emotional roller coaster where I spent many moments holding my breath. It was exciting and addictive. The story could have played out in so many different ways. If I didn’t know there were books on the horizon, I think I would have had a really hard time reading this.

I cannot put my emotions into words. I know, that is what a blogger is supposed to do, but seriously, I loved this book! The ending was nerve wracking, and I can’t say I’m happy about it, but it makes me even more excited to see what happens. Magic Breaks was exciting and adrenaline filled. If you haven’t started this series, you need to get on it! This book truly blew my mind!

Renee Raudman is so amazing! I can’t compliment her enough on the work she does with these books! Her accents are amazing and I can pick out characters right away. Truly great!