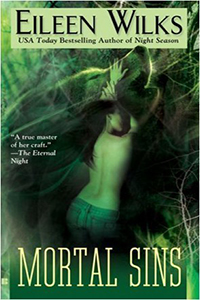 FBI agent Lily Yu is in North Carolina with her lover and mate, Rule Turner, Lu Nuncio of the Nokolai werewolf clan. He is there to take custody of his son from the boy's grandmother. It's a purely personal trip until Rule, in wolf form, finds three bodies in a shallow grave. They carry the stench of death magic, which makes the murders a federal crime. Lily takes charge of the investigation and soon realizes that nothing adds up- not the motives or the main suspect, who is behind bars when death strikes again.

But murder, however bizarre, is an everyday affair for Lily, who was a homicide cop before being recruited into the FBI's Magical Crimes Division. A more personal shock arrives in the form of Rule's son's mother. Why would she now challenge Rule's plan to bring his son to live among the Nokolai? But family matters must take a backseat when the violence escalates, and there's no rhyme or reason for the next strike- by a killer who may not even be of this world.

Mortal Sins is book 5 in the World of Lupi series by Eileen Wilks. I read this along with my book club.

In Mortal Sins, Lily and Rule must investigate a case involving Death Magic. I include Rule when I say this, as even though he has other personal things going on, he is still a vital piece to the mystery. Lily and Rule are actually in North Carolina so that Rule can take full custody of Toby. They did not intend to end up in the middle of an investigation that brings danger to everyone in the family. But that seems to be the way Lily’s life rolls.

I liked that Toby and his friends were able to contribute some to the investigation. It was a great side to Cullen to see him helping one of Toby’s friends deal with her magic. What she was seeing was really creepy and I can’t imagine being a child that sees what she did.

When Toby’s mom shows up, I was ready for a good fight. I didn’t think she was a great mom to start with, but she just proves herself even lower than I thought. I loved the way Lily handles her. She really steps up for Toby and Rule. I think Rule was kind of taken back by the way Lily handled things. She was pretty awesome. I still can’t believe that woman’s intentions for poor Toby! It will be so good for that boy to be at Clanhome.

I thought Mortal Sins was mysterious, creepy and a lot of fun! I like the way Lily and Rule’s relationship is building. I’m also a big fan of Cullen and Cynna. We don’t get to see Cynna in this installment, but we hear from her. I also think I missed a novella that had Cullen and Cynna’s wedding in it. I’ll have to go back and grab that. It would have been really interesting to be at that wedding where it is so against the nature of the lupi.