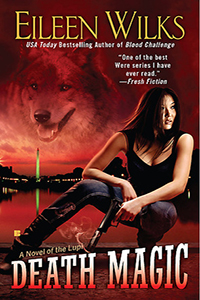 DEATH MAGIC opens with Special Agent Lily Yu in Washington, D.C. with her fiancé--lupi prince Rule Turner—to testify before a Senate subcommittee about her role in the magical collapse of a mountain last month. She is not there to tell them about the strange legacy she carries from that event—or about the arcane bond between her and Rule--or what her boss in Unit Twelve of the FBI’s Magical Crimes Division is really up to. She sure won’t tell them that the lupi are at war with an Old One who wants to remake humanity in her own image.

Lily is managing the conflict between her duty as an officer of the law and the need for secrecy pretty well . . . until the rabidly anti-magic senator who chairs that committee is murdered. The line between right and wrong, always so clear to her, becomes hopelessly blurred as events catapult them all towards disaster, and prophecies of a cataclysmic end to the country she loves and serves--and to the entire race of lupi--seem well on their way to being fulfilled.

The World of the Lupi series is building up to a war with the Great Bitch. Role shuffling is going on so that the defenses to any upcoming magical attacks can be dealt with without restraints from the normal government lines. This puts Lily in an uncomfortable position, but it does not take long for the corruption in the formal government to sway her. It is surprising to see what this new unit consists of.

As with the previous books, we get hit with shock after shock. There are also multiple issues that are mixed in that need to be dealt with. The Lady’s interference causes some conflict with Rule, but she is working towards the good of the Lupi and the world. The adrenaline stays strong throughout the story. Each character faces many trials and there are definitely going to be losses. I don’t think Eileen Wilks is afraid to kill off characters. It always leaves our main characters grieving.

I’m wondering what kind of wedding we are going to get with Rule and Lily. There is so much going on that has to be dealt with I can’t see when they are going to get this wedding Lily’s mother dreams of.

The world and setting gets more intricate the further into the series you go. However, there are little reminders of what happened previously to jump start the memory to understand the significance of what is currently happening. Death Magic is action packed and intense read.