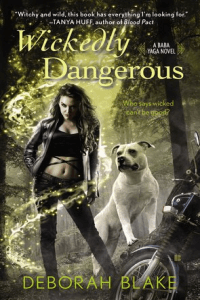 Known as the wicked witch of Russian fairy tales, Baba Yaga is not one woman, but rather a title carried by a chosen few. They keep the balance of nature and guard the borders of our world, but don’t make the mistake of crossing one of them…

Older than she looks and powerful beyond measure, Barbara Yager no longer has much in common with the mortal life she left behind long ago. Posing as an herbalist and researcher, she travels the country with her faithful (mostly) dragon-turned-dog in an enchanted Airstream, fulfilling her duties as a Baba Yaga and avoiding any possibility of human attachment.

But when she is summoned to find a missing child, Barbara suddenly finds herself caught up in a web of deceit and an unexpected attraction to the charming but frustrating Sheriff Liam McClellan.

Now, as Barbara fights both human enemies and Otherworld creatures to save the lives of three innocent children, she discovers that her most difficult battle may be with her own heart…

The Baba Yaga series is new to me. I have heard a bit about the Baba Yaga from the one in the Mercy Thompson series, but this tale is a little different. The Baba Yagas are a group of women who are selected in their youth to be fostered and taught magic. Their lives are really strange. Not strange that you wouldn’t enjoy them. They just have a lot of little oddities.

Wickedly Dangerous is the first in the Baba Yaga series and features Barbara. We get to learn a lot about the Baba Yaga lifestyle from her. She is not to be messed with. She has power and knows how to use it. Learning about Barbara we get to see a lot of fun stuff. Like a talking dog that is really a dragon and a magical Airstream. Who wouldn’t love that kind of thing? Barbara’s character was interesting. Learning about her and her quirks was a lot of fun too.

Part of a Baba Yaga’s job is to help solve problems involving the Otherworld. In Wickedly Dangerous, children are going missing. Barbara Yager rolls into town determined to solve the case and save her hide from the Otherworld Queen. Barbara must work with the Sheriff, who is on his way out of his job if these crimes don’t get solved. Despite her better judgement, Sheriff Liam must be brought into the magical world.

I found myself on a roller coaster throughout the book where Barbara takes a hit, then manages to come back with a great response. The stuff that was done to Barbara and all the goodness she tried to do for the community really frustrated me. Something would happen every stinking time. Barbara gets some good revenge though, and I got a good laugh.

The romance was up in the air for me. Barbara and Liam just seemed like an odd couple and it took a bit for me to really get interested in that part of the story. Maybe because they were just so different, it was difficult to see them together. It also may have been because I wasn’t really Liam’s biggest fan. I just wasn’t feeling a connection with him. Eventually their romance came together for me.

I was reminded a lot of Hansel and Gretel, which I think this was loosely based on to relate the Baba Yaga’s to the fairy tale world. The concept actually made a little sense to me, although I don’t agree with how it was being implemented. I’m glad Barbara was able to come up with a good solution that worked out for both the Otherworld and the human world.

Overall, I did enjoy Wickedly Dangerous and am interested to learn about the other Babas. Apparently there are three in the U.S. I’m sure they are going to make for interesting stories.