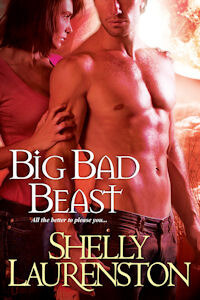 Seeing is deceiving. And Ric Van Holtz, the wolfishly sexy hero of Shelly Laurenston’s sizzling, wildly entertaining new tale, is nothing you expect—and everything you want…

When it comes to following her instincts, former Marine Dee-Ann Smith never holds back. And this deadly member of a shifter protection group will do anything to prove one of her own kind is having hybrids captured for dogfights. Trouble is, her too-cute rich-boy boss Ric Van Holtz insists on helping out. And his crazy-like-a-fox smarts and charming persistence are making it real hard for Dee to keep her heart safe….

Ric can’t believe his luck. He’s wanted this fiercely independent she-wolf from day one, but he never expected teamwork as explosive as this. And now is his last chance to show Dee what she needs isn’t some in-your-face Alpha male—but a wily, resourceful wolf who’ll always have her back in a fight…and between the sheets.

Big Bad Beast was an installment I was eager to get to. I just couldn’t picture Dee-Anne Smith with anyone. However, her attachment to Ric Van Holtz is evident from the start when she seems to keep showing up in his home over and over. Like she can’t stay away from him. Dee-Anne is not a romantic sort at all. She’s ALL killer. From what we know of her you just can’t imagine her falling in love!

Ric on the other hand has been in love with Dee since he was a little boy. He knew she was his mate, he just had to convince her. He was not pushy in any way and just let her be who she was. Ric is extremely smart and knows he was worming his way past Dee’s defenses. Especially with his cooking! Ric really is a kitchen snob!

Ric has a lot going on with his family and their business, while Dee and the others are also trying to find the funding source for the hybrid fights. Dee and Ric have to overcome the prejudice the Van Holtz’s have for the Smiths to try and accept their relationship. Dee is so laid back and just, basic, that Ric’s rich, snobby family doesn’t know what to do with her.

There was a lot going on in Big Bad Beast and it kept me on my toes. Dee is a great character and we get to see a side to her that is a little bit vulnerable and unsure. Ric was great in his plan to reel in Dee and make her his mate despite her being Eggie Smith’s daughter and his family having issues with him being with a Smith. It’s like this couple defied a lot of odds and obstacles to be together. I love that Ric doesn’t do anything to try and change Dee at all and he loves her just the way she is.

We’re also entertained by a great Fourth of July getaway with all the crew in one house, if that can even be imagined. All those shifters in one place definitely made for some great scenes. I loved that we had comedy, romance and action so closely intertwined that it kept you riveted to the story to see what was going to happen to who next. I look forward to seeing more of Dee and Ric as a couple.