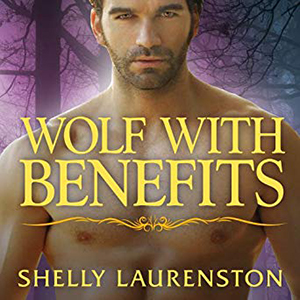 There’s nothing like a good-ol’-boy wolf. And ace security expert Ricky Lee Reed serves, protects and seduces with all the right moves...

Sure, Toni Jean-Louis Parker has to be the responsible oldest sister to a crazy-brilliant clan of jackal siblings. But now she’s cutting loose for some hot, sweaty, no-commitments fun—and the sexy, slow-talking, swift-moving predator assigned to keep her family safe is just the right thing to shapeshift her love life into overdrive. Trouble is, he’s starting to get all obsessive wolf on her every time he looks in her direction...

Getting serious about anyone isn’t in Ricky Lee Reed’s plans. Hell, even now he doesn’t really have a plan—outside of catching whomever is threatening this dangerously brilliant family. But the more he sees of Toni, the more he’s howling for her. And whatever it takes to convince her that what they have is everything, well, this wily wolf is down for the sizzling chase...

Wolf With Benefits introduces us to jackels and a family of prodigies. A bunch of new characters for us to sink our teeth into. The Jean-Louis-Parker family has some pretty interesting members and they are quite frightening. They certainly made for some great scenes.

It was also fun to focus on one of the Reed brothers. We do not know much about Ricky Lee, but the more you get to know him, the more reasonable of the three brothers he seems to be. The way he just followed Antonella around was kind of stalkerish, but also funny in a way because he just didn’t seem to understand why he was doing it.

Antonella (Toni) needs to break out from being the family manager / babysitter and become a woman on her own. The story focuses a lot on her doing things to get her out of her rut and becoming who she was meant to be. You really cheer for her after she makes each achievement that does not involve looking after one of her brothers or sisters. She knows how to handle the hardest of personalities, including our favorite bear lion hybrid hockey player. I also loved that she just couldn’t tolerate Blayne. Never getting her name right. I had to laugh at everything Toni called her and Blayne’s reaction.

I felt like Wolf With Benefits mainly focused on the growth of Toni, and not so much on the mystery plot line. We didn’t really get into the mystery and action until almost the end of the book. We get short little tidbits throughout, but I always felt confused when I came across them because I just didn’t understand where they were going. Once the story zeros in on that plot, it made a bit more sense. It did not relate to the overall arc of finding Whitlin, but there was some good action, albeit short.

I enjoyed Toni and Ricky Lee’s story despite not really getting pulled in to the mystery. I was mostly satisfied with the story before that was tacked onto the end, but I didn’t mind the quick jump into a side plot. It was action packed from the beginning and fast paced so it didn’t really drag on. It was kind of like the author got through most of the book and realized that she didn’t put any action or mystery into the story and wrote a quick scenario to put in there. I hope we don’t go back to anything that was related to that plot line because it was rushed enough that I don’t think I understood all of the ins and outs of it.

It will be fun to continue on with a couple of the new characters and see how the Whitlin plot line progresses.