Posted May 21, 2015 by Tanya in Contemporary Romance, Reviews / 2 Comments 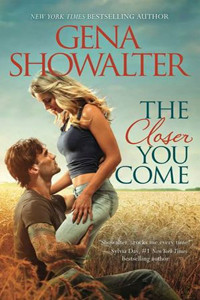 The Closer You Come by Gena Showalter
Series: The Original Heartbreakers #1
Published by HQN on March 31, 2015
Genres: Contemporary Romance
Pages: 400

Just released from prison, Jase Hollister has a dark and twisted past. And now, he has only one goal: stay out of trouble. Strawberry Valley, Oklahoma, sounds like the perfect place for him and his two brothers-by-circumstance to settle down and live a nice, simple life. But model citizen isn’t exactly this rugged bachelor’s default setting—especially when it comes to a certain hot-blooded Southern beauty…

Brook Lynn Dillon has always been responsible. Not that it’s done her much good. The down-on-her-luck waitress is broke, single and fun-deprived. Until Jase comes along. He is dangerous, stunningly protective, breathtakingly sexy and as tempting as sin, and the passion sizzling between them is undeniable. But can it melt her resistance? After all, the right kind of trouble might be just what they both need.

I am not typically a contemporary romance reader, but I just have to see what my gal Gena Showalter is going to release. I love her wit and humor in her paranormal series and I wanted to see if that rolled into her contemporary at all. There are times when it does come out, but I found this book had a lot of angst. Both main characters were emotionally needy, which may be something seen in contemporary a lot, I just don’t know.

I think I had a hard time with the whole setting as well. A town called Strawberry Valley is one thing, but for all the women to smell like strawberries, taste like strawberries, all their baked goods involved strawberries and jewelry was made with strawberry pendants. Also, we had characters with two names. These things really bothered me for some reason.

Brook Lynn was a good leading lady. She has a streak in her that comes out here and there that shows her fun side. Loved the drunk side of Brooke Lynn! I really didn’t like her actions of getting upset with him, walking away and then expecting him to chase her every time. Then getting all upset and thinking he didn’t care when he didn’t. Did she expect him to have no pride or that he didn’t respect her wishes? Of course, I would have loved to see that alpha, “you can’t get away from me” side of him too, but she just pulled this trick too many times.

Jase was a pretty tortured character, and I really understood his icy demeanor and unwillingness for Brook Lynn to know his past. He really suffered. I really felt for him because he had gone through so much, built his walls, then he had Brooke Lynn breaking through them, only to keep leaving him. I was frustrated for him and he really found a place in my heart.

The side characters are awesome. This is where the beloved humor I’ve come to love from Gena really shone. I loved the boys, the male sluts were awesome and I can’t wait for their books. How are they ever going to break through those reputations now when their “one” comes along? And Jessie Kaye was hilarious! She was so much fun and really held her own with the guys. I can see something brewing between a couple of the characters, but in the sneak peek at the next book discovered that it is not their book. Unfortunately, the next leading lady tastes and smells like strawberries too. *sigh*

We do get some action near the end, which is always one of my favorite parts of a book. I have to have some excitement and adrenaline. It’s quick and a small section, but I got my fix.

My rating is mostly based off of Jase and the side characters. Because I am not really an experienced contemporary romance reader, I might come back and change this rating after I have a few more under my belt. I am definitely continuing on with the series, I loved the other characters so much I have to see what happens. Besides, I love this author and will feel like I missed out if I don’t keep up with her books!