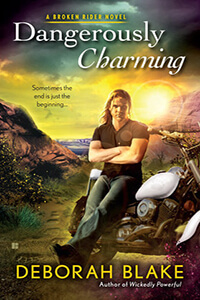 The Riders are three immortal brothers who protect the mythical Baba Yagas. But their time serving the witches has ended—and their new destinies are just beginning...

Ever since a near-fatal mistake stripped Mikhail Day and his brothers of their calling to be Riders, Day has hidden from his shame and his new, mortal life in a remote cabin in the Adirondack mountains. But when a desperate young woman appears on his doorstep, he cannot resist helping her—and cannot deny how strongly he’s drawn to her...

For generations, women in Jenna Quinlan’s family have been cursed to give up their first born child to the vengeful fairy Zilya. When Jenna finds herself unexpectedly pregnant, she is determined to break her family’s curse and keep her baby, even if it means teaming up with a mysterious and charismatic man with demons of his own...

To unravel the curse, Jenna and Day will have to travel deep into the Otherworld. But the biggest challenge of the journey might not be solving an ancient puzzle but learning to heal their own broken hearts...

The Riders have all gone their separate ways to try and heal from having their previous lives stripped from them. Mikhail Day has hidden himself away from the world in a cabin in the woods. He believes that his actions are the ones that brought about the changes for all the Riders. He used to be quite the charmer, but now has vowed never to fall for a damsel in distress ever again. But, guess who shows up at his door.

Jenna Quinlan is running trying to find a place where she can hide out and study her grandmother’s journals. A curse has been placed and her family’s first born children have to be given up to the fairly Zilya. Jenna had tried to stay away from the curse by just not getting pregnant, but no matter what precautions she took, it still happened. Because of this her ex doesn’t believe it is his and deserts her.

Day takes Jenna to the Baba Yaga Barbara who he believes will be able to help. She is able to untangle enough for them to know that to break the curse, Day has to be involved. So much for dropping off and going back to his cabin.

Most of the story takes place in the Otherworld. Jenna has made a plea to the Queen and Zilya has been restrained from approaching Jenna until two weeks after the baby is born. As is most things in the Otherworld, Zilya herself doesn’t have to be the one that goes after Jenna. She sends all kinds of monsters after them so they have to deal with those as well as the search for the stones they need. They are running through the Otherworld on a mission with all the crazy obstacles in the way. What makes it so fast pace is that time in the Otherworld does not work like the Human world. The baby begins to grow at an incredible speed, making their mission more and more dire.

I found Dangerously Charming exciting and I was constantly worried about that baby. I did not trust Zilya at all, and you just don’t know what is going to happen in the Underworld. It was good to see the Riders beyond their role with the Baba Yagas. Watching Mikhail come out of his head a little bit and understand the situation more was nice to watch. I’m excited to see the rest of the Riders make their way to realizing the same thing! I don’t see the next book up at Goodreads, but I hope it gets up their soon. I’m really excited to know more about the lives of the other Riders!