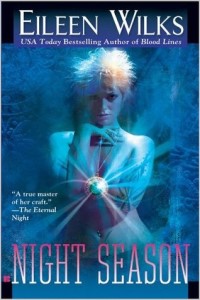 Lupine sorcerer Cullen Seabourne and FBI Agent Cynna Weaver are just coming to terms with having a baby, when they are lured to another realm where magic is commonplace and night never ends. Their only way home lies in tracking down a missing medallion-one also sought by powerful beings who will do anything to claim it.

Our book club has reached book 4 of the World of Lupi series by Eileen Wilks. Night Season is more of a Cullen and Cinna book than we’ve had before. We don’t see much of Lily and Rule, but there is a lot going on in this installment so you don’t really miss them. This installment goes into a completely different realm, with a whole bunch of new characters. The focus is almost completely off the Lupi.

Cullen and Cinna end up getting tricked into a whole new realm where Cinna meets someone unexpected. She’s already struggling to deal with the new revelation about her situation with Cullen, but now adding this new situation puts some more stress on her. Cinna has been brought to this realm to use her Finding skills. There is a missing medallion that can only be held by a ruler of the realm. It can drive anyone who is not supposed to have it crazy. But it is prophesied that Cinna will be able to retrieve it. It is a dangerous trek to find the medallion and it takes some serious trust between our couple to accomplish their task. It was really nice to see how close Cinna and Cullen had become. I think they make a great couple.

This new realm was definitely interesting to explore. It had light and dark seasons and no real days. There were a lot of ideas and rules surrounding humans that will make this kind of controversial when and if the realms try to negotiate some kind of relationship. However, with the surprising and even a little bit ironic twist to the realm’s new leader, some of those rules might change. I can’t wait to see how this realm grows and becomes connected with Earth.

Night Season was a really fun installment in the World of Lupi series. The relationship building between Cinna and Cullen along with the whole addition of a new realm made for interesting twists and turns. I can’t wait to start the next installment!