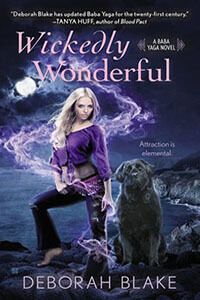 Known as the wicked witch of Russian fairy tales, Baba Yaga is not one woman, but rather a title carried by a chosen few. They keep the balance of nature and guard the borders of our world, but don’t make the mistake of crossing one of them…Though she looks like a typical California surfer girl, Beka Yancy is in fact a powerful yet inexperienced witch who’s struggling with her duties as a Baba Yaga. Luckily she has her faithful dragon-turned-dog for moral support, especially when faced with her biggest job yet…A mysterious toxin is driving the Selkie and Mer from their homes deep in the trenches of Monterey Bay. To investigate, Beka buys her way onto the boat of Marcus Dermott, a battle-scarred former U.S. Marine, and his ailing fisherman father.While diving for clues, Beka drives Marcus crazy with her flaky New Age ideas and dazzling blue eyes. She thinks he’s rigid and cranky (and way too attractive). Meanwhile, a charming Selkie prince has plans that include Beka. Only by trusting her powers can Beka save the underwater races, pick the right man, and choose the path she’ll follow for the rest of her life…

The first thing I will say about this series is that I love the dogs. They are practically my favorite characters in this series. I love that Wickedly Wonderful had a Newfoundland as that is what I had when I was growing up and I absolutely loved him. Despite when he thought he was saving me at the lake and almost drowned me.

It seems that Beka is trying to be classified as the ditsy, insecure, surfer girl character. I wouldn’t agree with the ditsy, but the insecure bit is there for sure. It made her character a bit unlikable as she didn’t have that kick ass attitude I like to see in my main heroines. At some points, she does use some of her own ideas and moves a bit toward confident. But most of the book has her doubting herself. That in turn makes you doubt her as well. I knew that eventually she was going to step up to the plate, but her insecurities were starting to make me wonder if she really was capable of the job.

Marcus comes across as grumpy. It’s like he’s put up this wall to protect himself from all his feelings. He doesn’t know what to do with this spirited girl who seems to be working her way through those walls. He’s quick to solidify those walls as soon as things get a little out of his comfort zone though.

I spent most of the book on the fence, not really invested in either of the main characters. (Loved the dog though) Eventually, things started to heat up. It was almost too late in the game for me, but the turn around in Beka pulled me back in. When she finally shrugs off that weight of insecurity and decides she’s going to do something, this Baba Yaga becomes a force. I really enjoyed how Beka was able to wrangle the bad guy and save herself from the Queen. Gratitude comes in various ways. One of them was really interesting and I was curious as to how that was going to be handled.

This book didn’t quite measure up to the first one, Wickedly Dangerous. I’m hoping that the next book, Wickedly Powerful will show us a bad ass Baba Yaga. I also would really like to see all three Baba’s come together to solve a mystery. Oh and I really need to find out what is going on with the Riders. I hope that is addressed in Wickedly Powerful too! Despite Wickedly Wonderful not truly blowing my socks off, I will definitely continue. I have too many unanswered questions. Plus the Baba Yaga’s aren’t something you see in a lot of paranormal. At least I haven’t seen them. (And I love their dragon/animals)